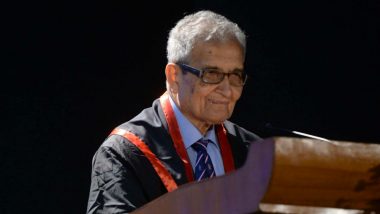 Thiruvananthapuram, June 25: Chief Minister Pinarayi Vijayan-led state government is all set to launch the 'Kerala Dialogue' amid coronavirus pandemic from Friday. For this, the state government has invited a series of visionaries including noted political thinker Noam Chomsky and Nobel-laureate economist Amartya Sen.

According to a report published in the New Indian Express, the 'Kerala Dialogue' is an initiative taken by administration where prominent personalities from various walks of life would debate on new concepts and development models. The debate series will be inaugurated by CM Vijayan himself and would be telecast through the Chief Minister's official social media accounts. Kerala to Launch Psychosocial Project for Counselling Students, KK Shailaja Says Counselling to Be Done on Helpline Number 1056.

Among the prominent personalities invited for debate for the first episode include political thinker Noam Chomsky and Nobel-laureate economist Amartya Sen and WHO Chief Scientist Dr Soumya Swaminathan. They will speak on the topic -- 'Kerala - Future Paths of Development'. It will moderated by State Planning Board vice chairman VK Ramachandran and senior journalist N Ram.

Apart from these three personalities, Kerala government is in talks with prominent personalities like scientists, philosophers, diplomats, economists, writers, journalists, activists, technocrats and people's representatives. The next episode will also be telecast through the Chief Minister's official social media accounts.

(The above story first appeared on LatestLY on Jun 25, 2020 03:52 PM IST. For more news and updates on politics, world, sports, entertainment and lifestyle, log on to our website latestly.com).