A major fire broke out at a hotel in Lenin Sarani area of West Bengal's Kolkata. The incident took place on Sunday evening. 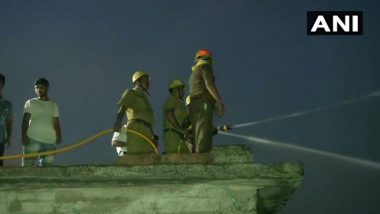 Kolkata, June 16: A major fire broke out at a hotel in Lenin Sarani area of West Bengal's Kolkata. The incident took place on Sunday evening. Altogether five fire engines were pressed into action to douse the blaze. Till now, no loss of life has been reported. Borivali: Abandoned Vehicles Parked Under Bridge Catch Fire.

In the footage shared by Indiablooms, the entire top floor of the building can be seen engulfed in flames. The cause of the fire is not yet known. In the pictures shared by news agency ANI, fire officials can be seen carrying out the rescue operations. Jabalpur: Fire breaks Out At High Court, Fire Tenders Reach Spot.

Kolkata: Fire broke out at a hotel in Lenin Sarani area this evening; 5 fire tenders present at the spot. #WestBengal pic.twitter.com/tClyOZ1ZJQ

A major fire broke out in a building on Lenin Sarani in Kolkata Sunday evening. Details are awaited. #fire #kolkata #kolkatafire

Earlier in a similar incident, a massive fire broke out at a scrap godown in Punjab's Ludhiana in wee hours of Sunday. In the incident, no casualties were reported and the cause of the fire is yet to be ascertained. To douse of the fire, six fire tenders were rushed to the spot.

(The above story first appeared on LatestLY on Jun 16, 2019 08:36 PM IST. For more news and updates on politics, world, sports, entertainment and lifestyle, log on to our website latestly.com).