On the first day of August, Maharashtra jumped to a new high of 322 COVID-19 deaths, with the state death toll crossing the 15,000-mark, besides notching fresh cases in the 9,000 plus range, officials said here on Saturday. The state recovery rate increased for the sixth consecutive day, zooming up from 60.68 per cent to 61.82 per cent on Friday. 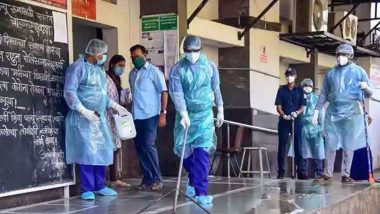 Mumbai, August 1: On the first day of August, Maharashtra jumped to a new high of 322 COVID-19 deaths, with the state death toll crossing the 15,000-mark, besides notching fresh cases in the 9,000 plus range, officials said here on Saturday. The state has recorded 9,601 new Covid cases - although down from the July 30 peak of 11,147, while the recovery rate continues to climb up.

With the fresh fatalities of 322 - up from the previous peak of 298 recorded on July 29 - the state death toll shot up from 14,994 a day earlier to 15,316 now, while the total cases touched 431,719 - both highest in the country. According to Saturday's figures, there was one death roughly every 4 minutes and a stupendous 400 new cases every hour added to the state tally.

The state recovery rate increased for the sixth consecutive day, zooming up from 60.68 per cent to 61.82 per cent on Friday, while the current mortality (death) rate remained stable at 3.55 per cent. The Health Department said that of the total cases till date, 149,214 are 'active cases' (ill), dropping from Friday's figure of 150,662, and this number is lower (favourable) vis-a-vis the number of patients cured and discharged, indicating a positive sign. Maharashtra ‘Mission Begin Again’: Indoor Gyms, Other Fitness Centres to Remain Shut, Only Outdoor Centres for Exercise and Gymnastics Allowed to Open From August 5.

On the positive side, 10,725 recovered patients returned home on Saturday - the highest till date - taking the total number of discharged patients to 266,883 - considerably higher than the 149,214 'active cases' currently in the state. Of the total 322 fatalities, Pune again notched the highest 76 deaths, to push behind both Mumbai (45 dead) and Thane (41 dead) for the third consecutive day. More fatalities are now reported from regions outside the country's commercial capital.

Mumbai deaths came in the sub-50 range for the second time in a week and with 45 fatalities, the city toll increased from 6,353 to 6,398 and the number of corona cases increased by 1,047 - to touch 115,331 now. Besides, there were 28 fatalities in Raigad, 20 in Jalgaon, 17 in Aurangabad, 14 in Palghar, 13 in Nashik, 8 each in Kolhapur and Sangli, 7 in Solapur, 6 each in Ahmednagar, Satara, Latur and Osmanabad, 3 in Amravati, 2 each in Dhule, Ratnagiri, Beed, Nanded, Buldhana and Nagpur, 1 each in Nandurbar, Jalna, Hingoli, Akola, Washim besides one from another state.

The MMR (Thane Division) remains on the brink as deaths spiral and cases pile up, with the toll shooting up by 128 for the second day to touch 9,766 deaths and fresh 2,995 new cases, pushing up the number to touch 242,778 now. Thane District cases have touched 94,564 with 2,626 fatalities to emerge as the second worst-hit district after Mumbai in the state.

Pune district continues to race ahead by notching 91,930 cases, with the death toll increasing from 2,099 a day earlier to 2,175 on Saturday. With 76 more fatalities, the Pune Division's (comprising Pune, Solapur and Satara districts) death toll has reached 2,830 and the case tally zoomed up with 3,127 new cases to reach 105,359, but remains far behind MMR.

All the eight divisions recorded fatalities, while Chandrapur (out of total 36) remains a 'zero-Covid-death district', though each division and district in the state notched fresh cases. Meanwhile, the number of people sent to home-quarantine for Corona increased from 899,557 to 908,099 now, while those in institutional quarantine went down from 39,535 to 38,947 on Saturday.

(The above story first appeared on LatestLY on Aug 01, 2020 10:33 PM IST. For more news and updates on politics, world, sports, entertainment and lifestyle, log on to our website latestly.com).