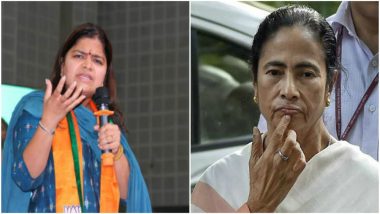 Mahajan, speaking at a rally in Kolkata, ridiculed Banerjee's pet slogan 'maa, mati, manush' (mother, motherland and people) and described the Trinamool Congress supremo's activities in the state as "inhuman".

"People had hopes that being a woman, Banerjee will have a sense of compassion for the people. But the way she has been running this government from the first day, I think she should be called U-turn didi. She has forgotten all her promises towards the mothers and sisters. Today West Bengal is at the top in cases of atrocities against women," Mahajan said.

"If we talk about 'maati' (motherland), their MLAs are illegally capturing lands, and fighting gang wars over it while the people of the state are despondent, dispirited and unemployed. It seems Benerjee has actually gone forward with the slogan of mein Mamata amanush' (I am inhuman)," she said.

Accusing the Trinamool Congress of committing large-scale violence and atrocities on BJP activists in the state, Mahajan said the TMCA has become a "terror making machine".

She alleged that Banerjee's vow to usher in change (Parivartan) in the state when she came to power in 2011 has fallen flat on its face over the past seven years. The only visible change was in the colours of the buildings -- painted blue and white, Banerjee's favourite -- and in lives of the Trinamool Congress activists.

Taking a swipe at Banerjee for her criticism of the draft NRC in Assam, the BJP leader accused the Bengal Chief Minister of trying to turn her state into Bangladesh.

"Mamata-didi is secretly working to turn West Bengal into Bangladesh. Those who are saying that there will be a civil war in the country because of NRC...we will uproot such anti-nationals from here and go ahead," she added.

(The above story first appeared on LatestLY on Aug 11, 2018 06:10 PM IST. For more news and updates on politics, world, sports, entertainment and lifestyle, log on to our website latestly.com).