A girl from Naxa-hit Dornapal in Sukma is set to become the first doctor from the district after having qualified for MBBS. 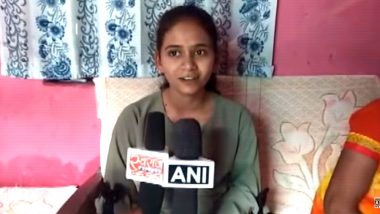 Maya, the girl from Sukma who qualified for MBBS (Image credit: ANI)

Dornapal, August 24: A girl from Naxa-hit Dornapal in Sukma is set to become the first doctor from the district after having qualified for MBBS. Maya cleared the National Eligibility-cum-Entrance Test (NEET), conducted annually for getting admission into medical courses, in June this year.

"I have always dreamt of becoming a doctor. I would like to dedicate my service as a doctor to the people of this place," she said as quoted by ANI. Maya has studied at a government school and will be completing her MBBS degree in 2023 from Ambikapur medical college.

Video of Maya speaking about her dream

Maya said that her family had to struggle to make ends meet after her father died when she was just 10 years old.

"My mother had to take care of my three siblings besides me. They too, were studying in school at that time. I only used to get Rs 500 as pocket money for a month. Though, due to the paucity of funds I faced a lot of issues while preparing for NEET, but because I was goal oriented I managed to overcome the hurdle. So, without paying heed to problems, I concentrated only on studies and was working only towards fulfilling my dreams."

With inputs from ANI

(The above story first appeared on LatestLY on Aug 24, 2018 05:09 PM IST. For more news and updates on politics, world, sports, entertainment and lifestyle, log on to our website latestly.com).