Waterlogging was reported from several areas including Sion, Bandra, and Andheri Subway among others as the city recorded 95.81 mm of rain in the last 12 hours. 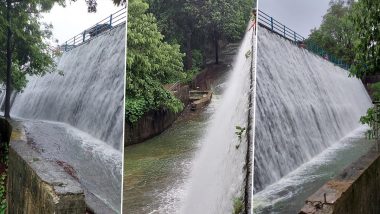 Mumbai, July 5: As heavy rains continue to lash Mumbai and its surrounding areas, the India Meteorological Department (IMD) has issued a heavy rain alert for Mumbai, Thane, and Palghar.

The weather bureau has also issued an ‘orange’ alert for Mumbai and the west coast of Maharashtra with a warning of heavy rainfall and strong winds for the next five days. Meanwhile, Maharashtra CM Eknath Shinde has directed officials to keep a vigil and also asked them keep the NDRF squads ready.

Here are the latest updates:

Mumbai's Powai lake on Tuesday started overflowing due to continuous rainfall in the city. Powai Lake, which is an artificial lake of BMC has a storage capacity of 545 crore liters and is mainly used for industrial purposes as it is not fit for human consumption.

The artificial lake with a storage capacity of 545 crore litres warer, was built in the year 1890

Since water in the Powai lake is not potable, it is mainly used for industrial purposes. pic.twitter.com/aSUsXA1EJw

A landslide occurred near Thane's Mumbra bypass road amid heavy rainfall. Fortunately, no injuries were reported.

Meanwhile, Zig Zag Road in Bandra was closed as heavy rains triggered a landslide around 3 pm. A Honda City parked below was completely smashed.

Amid the heavy downpour in parts of Maharashtra and Mumbai, CM Eknath Shinde today reached BMC headquarters’ disaster management room in Mumbai and took a stock of the situation in the city.

Several parts of North-West Mumbai suffered amid the heavy rainfall in the area. Four subways in the northwest part of Mumbai had to be closed for traffic on Tuesday due to heavy rains since the early hours of the day, officials said.

As per IMD forecast, Mumbai city and suburbs is very likely to experience intense spells of rainfall during the next 3-4 hours. Meanwhile, Maharashtra CM Eknath Shinde on Tuesday offered prayers at the Siddhivinayak Temple in Mumbai's Prabhadevi. Shinde's visit comes a day after the new government in Maharashtra won the trust vote by a 164-99 margin, while 3 members abstained from voting.

As heavy rains continue to last the city, citizens took to Twitter to share updates about waterlogging in certain areas. As per reports, Bandra, Sion, Andheri subway, Chembur, Santacruz, Khandeshwar railway station, Ghatkopar were all flooded with water as people waded thrpugh the waterlogged streets in these areas.

Mumbai to receive heavy rainfall on July 5, 7, and 8: IMD

Jayant Sarkar from the India Meteorological Department (IMD) on Tuesday said that Maharashtra is expected to receive widespread rainfall in next 5 days. "Ghat areas also expected to get good rains. In Mumbai, 5,7&8 July will see heavy rainfall," he said. The weather bureau has also issued red alert for Ratnagiri and Raigad districts.

In a shocking incident, a 16-feet long security wall in Thane's Mumbra area collapsed on July 4 due to incessant rainfall. Seventeen families from the Anil Bhagat Chawl have been temporarily shifted to the Thane Municipal Corporation school.

A 16-feet long security wall in the Mumbra area collapsed on 4th July, owing to the incessant rainfall in Thane. Seventeen families from the Anil Bhagat Chawl have been temporarily shifted to the Thane Municipal Corporation school. pic.twitter.com/ZJIG27qAD7

According to reports, severe water logging has been reported between T junction and Kalanagar in Bandra, after heavy rains lashed several parts of the city. Besides, water logging was also reported at Chembur-Govandi signal.

#MumbaiRains: Severe water logging reported between T junction and #Kalanagar in #Bandra, after heavy rains lash parts of the city.

Amid the heavy rains in the city, the Mumbai Traffic Police said that due to water logging, the Andheri subway is closed for Vehicular movement. Traffic is diverted to SV Road via Gokhale Bridge Junction.

Due to water logging, the Andheri subway is closed for Vehicular movement. Traffic is diverted to SV Road via Gokhale Bridge Jn. #MTPTrafficUpdates.

The Mumbai Fire Brigade team said that a landslide incident was reported in Ghatkopar, Panchsheel Nagar in amidst the heavy rains. No casualties reported so far.

Maharashtra | A landslide incident reported in Ghatkopar, Panchsheel Nagar in Mumbai amidst the heavy rains. Fire vehicles reaching on the spot. No casualties reported so far: Mumbai Fire Brigade

In view of heavy rainfalls in the city, a total of 8 route diversions have been done at Sion Road no. 24 and Shell Colony, Chembur by the BEST.

Maharashtra | In view of the incessant rains in Mumbai and waterlogging due to it, a total of 8 route diversions have been done at Sion Road no. 24 and Shell Colony, Chembur in Mumbai: BEST (Brihanmumbai Electric Supply and Transport) PRO pic.twitter.com/NArZSLBfQQ

In view of the heavy rainfall warning for Mumbai over the next few days, five NDRF teams have been deployed in Mumbai.

In view of heavy rain warnings issued by IMD in the coming days for Mumbai, #five NDRF teams are deployed in Mumbai. #MumbaiWeather pic.twitter.com/plQNUAspZz

According to CMO, CM Eknath Shine held a discussion with Chief Secretary Manukumar Srivastava. He has directed all the related districts' guardian secretaries to keep a vigil & control the situation.

Maharashtra | In the wake of heavy rainfall in various parts of the state, CM Eknath Shinde held a discussion with Chief Secretary Manukumar Srivastava along with directing all the related districts' guardian secretaries to keep a vigil & control the situation: CMO

The BMC took to Twitter to update citizens about high tide and low tide timings. A a high tide of of 4.01 meters will take place at evening around 4.10 pm while the low tide is likely to take place at 10.21 pm with a height of 1.75 meters.

Moderate to heavy rain in city and suburbs. Possibility of very heavy rainfall at isolated places.

Waterlogging was reported from several areas including Sion, Bandra, and Andheri Subway among others as the city recorded 95.81 mm of rain in the last 12 hours.

#WATCH | Maharashtra: Mumbai wakes up to severe waterlogging in the aftermath of heavy rains lashing the city.

Mumbai's Sion area has been badly hit by the torrential rains.

The IMD has also issued heavy rain alert for Ratnagiri, Sindhudurg, Pune, Beed, Latur, Jalna, Parbhani and several other areas in the state.

(The above story first appeared on LatestLY on Jul 05, 2022 10:55 AM IST. For more news and updates on politics, world, sports, entertainment and lifestyle, log on to our website latestly.com).