A silver urn with coconut on top gifted to Prime Minister Narendra Modi by Gujarat Chief Minister Vijay Rupani was sold for Rs one crore at an ongoing auction of his mementoes. The kalash with a message inscribed in Gujarati had a base price of Rs 18,000. 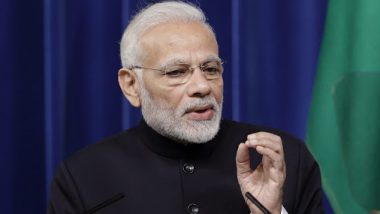 According to a report published in India Today, the photo stand also carries a message in Gujarati and the base price set for this item was Rs 500. The money collected from the auction will be used for Namami Gange project. A total of 2,772 articles will be sold at the auction which began on September 14 and will continue till October 3. Auction of Gifts Received by PM Narendra Modi Begins Today Online at pmmementos.gov.in; Funds Collected to Be Used For Namami Gange Project.

The gifts including headgears, shawls, portraits, swords gifted by different organisations and chief ministers to the PM are currently on display at the National Gallery of Modern Arts in New Delhi. The auction will be completely online and the bidders can log on to pmmementos.gov.in to bid for the products gifted to the PM in the last six months.

The mementoes include 576 shawls, 964 angavastram (clothes), 88 pagris (head-dress) and various jackets portraying the diversity of India. The similar auction took place in January. Over 1,800 gifts received by the prime minister were sold in a fortnight-long exercise, and around 4,000 bidders participated.

(The above story first appeared on LatestLY on Sep 17, 2019 06:32 PM IST. For more news and updates on politics, world, sports, entertainment and lifestyle, log on to our website latestly.com).