"This is a humble step of my government to make sure that we facilitate the people for resolving their long-pending administrative issues," said the Chief Minister while launching this programme here. 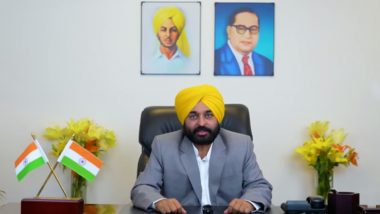 Chandigarh, May 16: Punjab Chief Minister Bhagwant Mann on Monday launched a first-of-its-kind programme of his government, 'Lok Milni' (public interaction) for redressal of people's grievances on the spot.

"This is a humble step of my government to make sure that we facilitate the people for resolving their long-pending administrative issues," said the Chief Minister while launching this programme here. Punjab CM Bhagwant Mann Launches Drive to Fill Over 26,000 Vacancies in Govt Departments.

Mann said the interactive programme is aimed at ensuring a single-window platform to the people for redressal of their complaints. He said the top brass of his government accompanied him during this 'Lok Milni' to ensure that the matters flagged by people are resolved immediately.

Mann said the endeavour is aimed at ensuring that people do not have to run from pillar to post for getting their work done.

As many as 61 complainants listed their grievances before the Chief Minister during the 'Lok Milni'. He directed top officers present on the occasion to ensure immediate resolution of these complaints in a time-bound and result-oriented manner.

Mann said that he will be personally monitoring the status of these complaints every week, adding any sort of dereliction in this work will not be tolerated.

Addressing a complaint, the Chief Minister asked the department of Social Justice and Empowerment to immediately release the pending arrears of the 'shagun scheme' to the eligible beneficiaries.

On another complaint, Mann asked the Water Resources Department to ensure that drinking water was supplied to each and every beneficiary without any prejudice.

On the complaint of Seema Rani, whose husband had passed away during Covid-19 two years ago, the Chief Minister asked the officers to ensure that she gets a job at the earliest as per government's policy.

(The above story first appeared on LatestLY on May 16, 2022 06:41 PM IST. For more news and updates on politics, world, sports, entertainment and lifestyle, log on to our website latestly.com).