Punjab Extends Coronavirus Lockdown Till May 1, Other Indian States Expected to Follow

Punjab CM Captain Amarinder Singh, while speaking to reporters earlier today, said the state has to take further strict measures in bid to contain the transmission of coronavirus. Singh hinted that the virus has already entered into community transmission stage in some pockets. 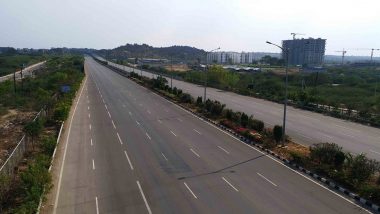 Chandigarh, April 10: After Odisha, Punjab became the second Indian state to officially extend the lockdown beyond the period announced by Prime Minister Narendra Modi. The Chief Minister's Office issued an order on Friday, announcing the extension of the curfew-like restrictions till May 1 in view of the rising COVID-19 cases. Other Indian states are also expected to follow suit. Coronavirus Cases in India Rise to 6412 After a Spike of 547 Cases in Past 12 Hours, Death Toll Jumps to 199.

Punjab CM Captain Amarinder Singh, while speaking to reporters earlier today, said the state has to take further strict measures in bid to contain the transmission of coronavirus. Singh hinted that the virus has already entered into community transmission stage in his state. Odisha Extends Lockdown Till April 30, Becomes First State in India to Do So.

"In Punjab, 27 cases are there with no travel history, yes it can be said that most of them are cases of community transmission," he said, adding that the next few days are the most crucial in fight against the pandemic.

"The figures that I have been given by Indian scientists and medical practitioners are that 80-85 percent of India may get infected, if these figures are correct then they are horrendous figures," the Punjab CM was reported as saying.

Punjab extends lockdown/curfew in the state till May 1st pic.twitter.com/mCjw01uy4D

On Thursday, Odisha became the first Indian state to extend the lockdown beyond April 14 -- when the restrictions announced by PM Modi are scheduled to end. Chief Minister Naveen Patnaik said the curfew will continue till April 30, adding that schools, colleges and all educational institutions will remain closed till June 17.

Other states are also expected to extend the restrictions due to the rise in number of coronavirus cases. Maharashtra Health Minister Rajesh Tope told reporters last week that it is practically not possible to lift the lockdown on April 14. The restrictions would have to continue for at least the next two weeks, he said.

Assam Home Minister Himanta Biswa Sarma, in his press briefing earlier this week, said the lockdown could only be lifted in a systematic and staggered manner. Telangana Chief Minister K Chandrasekhar Rao appealed PM Modi to extend the restrictions on nationwide scale, claiming that lockdown is the only weapon available with the government to fight the pandemic.

(The above story first appeared on LatestLY on Apr 10, 2020 05:22 PM IST. For more news and updates on politics, world, sports, entertainment and lifestyle, log on to our website latestly.com).