The foundation laying ceremony for the construction of Ram temple in Ayodhya may be held on August 5, according to reports. 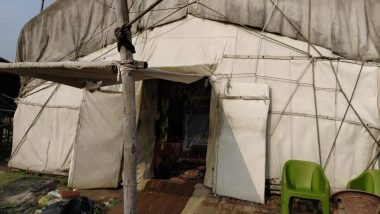 Ayodhya, July 19: The foundation laying ceremony for the construction of Ram temple in Ayodhya may be held on August 5, according to reports. Sri Ram Janmabhoomi Teertha Kshetra Trust, formed to oversee the construction of Ram Mandir, has sent a formal invite to Prime Minister Narendra Modi to lay the foundation of the temple. Govind Giri Maharaj, a member of the trust, said they have suggested two dates to the Prime Minister's Office (PMO).

"Our first priority is to hold the foundation laying ceremony and for this, we have invited Prime Minister Modi. We have suggested July 29, and August 5 as auspicious dates. We will hold the ceremony in the presence of Prime Minister. By the first week of August, the ceremony will be done," Govind Giri Maharaj said. He stressed that the ground-breaking ceremony (bhoomi poojan) will be held in the first week of August. Ayodhya Verdict: Full Text of Supreme Court Judgment in Babri Masjid-Ram Janmabhoomi Title Dispute.

Earlier, Kameshwar Chaupal, another member of Sri Ram Janmabhoomi Teertha Kshetra Trust, had said that they suggested two dates - August 3 or August 5 - as the dates to lay down the foundation of the Ram temple. On Saturday, the trust held its second meeting at Circuit House in Ayodhya. The president of the trust, Mahant Nritya Gopal, presided over the meeting.

Following the meeting, General Secretary Champat Rai said that construction will be completed within 3-3.5 years from the date of its start. The trust has also decided that the proposed Ram temple would have a height of 161 feet along with five domes. "Ram Temple will be 161 feet high and now five domes will be built instead of three," Chaupal said.

The Supreme Court in November last year had directed the central government to hand over the site at Ayodhya, where Babari Masjid once stood, for the construction of the Ram temple and set up a trust for this. The five-judge bench said that the Sunni Waqf Board, which was a party to the 7-decade-old title suit, should be given an alternate five-acre land at some other suitable place for construction of a mosque.

(The above story first appeared on LatestLY on Jul 19, 2020 09:08 AM IST. For more news and updates on politics, world, sports, entertainment and lifestyle, log on to our website latestly.com).