Second Batch of Rafale Jets to Arrive in India by Evening; Here's When And Where to Watch Live Coverage of French Fighter Jets Arriving at Jamnagar Airbase 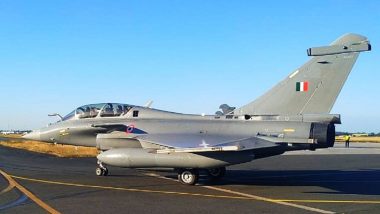 The live coverage of the historical event of the arrival of the second batch of these fighter jets could be watched on DD News or its youtube channel. With the arrival of three more Rafale jets, the fighting capability of the Indian Air Force (IAF) will get a boost as the IAF will have a total of eight French jets in service. India received the first batch of five Rafale aircraft on July 29 which were inducted on September 10 at Ambala Air Base in the 17 'Golden Arrows' Squadron.

India had signed an inter-governmental agreement with France to procure 36 of these aircraft at the cost of Rs 59,000 crore. After the induction of the aircraft, Indian Defence Minister Rajnath Singh said that the Rafale deal is a game-changer. "I am confident our air force has acquired a technological edge with Rafale," the minister had pointed out.

Rafale jets are arriving in India amid a standoff with China along the Line of Actual Control (LAC) in the Ladakh sector. In September, Rafales also conducted familiarisation sorties in over Ladakh. The jeta are manufactured by Dassault Aviation, a French defence major.

The Rafale is a 4.5 generation aircraft and has the latest weapons, superior sensors and fully integrated architecture. It is an omnirole aircraft which means it can carry out at least four missions in one sortie. These Rafale jets are equipped with HAMMER missiles. These will also be armed with beyond visual range missiles like Meteor, SCALP and MICA.

(The above story first appeared on LatestLY on Nov 04, 2020 09:00 AM IST. For more news and updates on politics, world, sports, entertainment and lifestyle, log on to our website latestly.com).