A 24-yr-old man sustained 70% burn injuries after two men, with whom he had a squabble over a song played by the DJ at a marriage function, poured acid on him in a village in Uttar Pradesh's Rampur district. 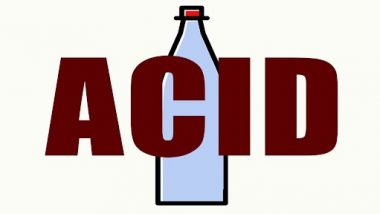 Bareilly, July 2: A 24-yr-old man sustained 70% burn injuries after two men, with whom he had a squabble over a song played by the DJ at a marriage function, poured acid on him in a village in Uttar Pradesh’s Rampur district.

The man, identified as Rajeev Kumar, is admitted to a private hospital in Bareilly where doctors said his chances of survival are low. Uttarakhand: Week After Alleged Gangrape of Roorkie Woman, Her Minor Daughter, Cops Arrest 5

This incident was reported from Ahroh village under the jurisdiction of Khajuriya police station on June 9. Kolkata Shocker: 30-Year-Old BPO Executive Gang-Raped by Senior Colleagues After Office Party, Accused Arrested

Kumar had attended a wedding in Bareilly on June 7 during which he had a scuffle with two men - identified as Ganesh Lal and Arvind Kumar - after he asked the DJ to change the track the accused were dancing to, reported TOI.

The victim's father, Aasiram, said, "At the time, the locals intervened and resolved the issue. However, later Ganesh and Arvind came to our village and after doing a recce of my son's activities, they caught him at an abandoned place and poured acid on him. He was severely burnt and would have died if he hadn't jumped in a nearby pond."

"My son is fighting for survival but the police, despite registering an FIR, have failed to arrest the accused who are openly threatening me to withdraw the case or else they will not spare me either. I want the police to arrest them as they have destroyed my son's life," added the aggrieved father.

SHO Khajuriya, Vinay Verma said, "We have recorded the statement of the victim and his father and a chargesheet will be submitted in the court soon."

(The above story first appeared on LatestLY on Jul 02, 2022 11:57 AM IST. For more news and updates on politics, world, sports, entertainment and lifestyle, log on to our website latestly.com).