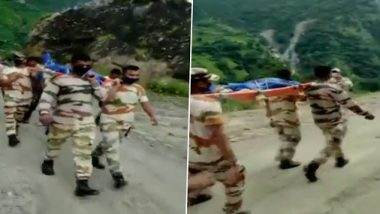 Dehradun, September 2: The Indo-Tibetan Border Police (ITBP) in Uttarakhand carried a body of a local for 8 hours and walked a distance of 25 kms to reach Munsyari. The ITBP carried the body of the local from Syuni village in remote area of Pithoragarh to reach Munsyari. The mortal remains of the deceased were handed over to his family on August 30. According to the ITBP, the local had died due to shooting stones. 'Shooting stones' is the name given to pieces of rock that roll down the mountain slope.

Watch Video: ITBP jawans carried the body of a local for 8 hrs in Uttarakhand

#WATCH Uttarakhand: ITBP jawans carried the body of a local for 8 hrs & walked a distance of 25 kms to reach Munsyari from Syuni village, in remote area of Pithoragarh district, to hand it over to his family, on 30th Aug. The local had died due to shooting stones. (Source: ITBP) pic.twitter.com/KOuatrzAaV

On August 27, the India Meteorological Department (IMD) had predicted heavy rainfall over several parts of central and north India for the coming days. India received 27 percent more rainfall than normal in August, the fourth highest amount in the last 120 years, the IMD said.

(The above story first appeared on LatestLY on Sep 02, 2020 08:53 AM IST. For more news and updates on politics, world, sports, entertainment and lifestyle, log on to our website latestly.com).