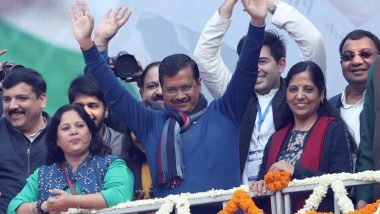 New Delhi, February 16: Aam Aadmi Party's (AAP) national convenor Arvind Kejriwal will take oath as the Delhi Chief Minister for the third consecutive time on Sunday. The swearing-in ceremony of Arvind Kejriwal will take place at the iconic Ramlila Maidan. The AAP national convenor will be taking oath along with his cabinet at 10 am. Ministers who will take oath along with Kejriwal, include Manish Sisodia, Satyender Jain, Gopal Rai and Kailash Gehlot. The AAP retained power in the Delhi Assembly Elections 2020 by winning 62 of the 70 seats. Almost nine years ago, Kejriwal launched India Against Corruption movement along with Anna Hazare from Ramlila Maidan. In 2013 and 2015, the AAP leader’s oath-ceremony was held in the same venue.

Kejriwal has invited Prime Minister Narendra Modi for the oath-taking ceremony. Besides PM Modi, the invitation has also been sent to seven Lok Sabha MPs from Delhi and all eight newly elected Bharatiya Janata Party (BPP) legislators. However, the Prime Minister is unlikely to attend as he will be visiting Varanasi, his Lok Sabha constituency, to inaugurate several projects. Delhi Assembly Elections Results 2020: Three Reasons Why Arvind Kejriwal's AAP Won Despite BJP Resurgence.

The AAP has invited 50 representatives from different sectors contributing towards the Delhi Nirman. These people will share stage with the AAP national convenor. The list of sectors includes Angadwadi Workers, Doorstep Delivery, Education, Healthcare, Farmers, Farishtey Scheme, Infra, Safai Karamchari, Public Transport, Bus Marshals, and others. A special invitation has been sent to 'Baby Mufflerman' Aavyan Tomar, who won hearts by dressing as Kejriwal on the day of the election result. AAP Membership Drive: Party Says Over 1 Million People Joined It Since Victory in Delhi Assembly Elections 2020.

In the swearing-in, the Kejriwal-led party is expecting around one lakh people. According to senior officials, around 5,000 police personnel, 125 CCTV cameras, 12 LED screens and 45,000 chairs will be there. Ahead of the Kejriwal’s oath-taking ceremony movement commercial vehicles or buses banned from Rajghat Chowk and Delhi Gate Chowk towards Guru Nanak Dev Chowk via JLN Marg. These traffic regulation will be in place from 8 am to 2 pm. Traffic movement will also be affected from Chatta Rail towards Delhi Gate Chowk via Netaji Subhash Marg and Ram Charan Aggarwal chowk towards Delhi Gate chowk via BSZ marg. Amul Dedicates an 'AAParajit' Ad to Arvind Kejriwal After Winning Delhi Elections.

In the recently concluded Delhi Assembly Elections, the AAP won 62 seats out of 70 with close to 54 percent vote share while the BJP was restricted to 8 seats. In these elections, AAP’s poll campaign was based on the work done by the Kejriwal government in the sectors like education and health care in the last five years. The Congress who ruled Delhi for consecutively for 15 years between 1998 and 2013 once again drew blank.

(The above story first appeared on LatestLY on Feb 16, 2020 12:51 AM IST. For more news and updates on politics, world, sports, entertainment and lifestyle, log on to our website latestly.com).