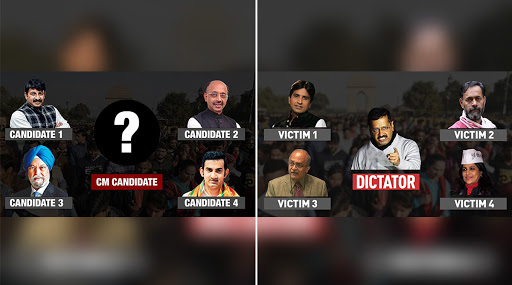 New Delhi, January 16: The Delhi Assembly Elections 2020 are just a month away, and the political parties have begun their campaigns not only on streets on national capital but also on social media. In the latest, Aam Aadmi Party has come up with a new poster asking the Bharatiya Janata Party on their chief ministerial candidate. This political jab arrived hours after BJP MP Gautam Gambhir took pot shot on AAP, referring Arvind Kejriwal as 'dictator'.

In the tweet shared by AAP on their social media handle, AAP poster had questioned the BJP on their CM candidate and showed the images of Manoj Tiwari, Vijay Goel, Hardeep Singh Puri and Gautam Gambhir. The tweet says, "Who is BJP's CM candidate? Our graphics guy is waiting." Delhi Assembly Elections 2020: Congress Retaliates to AAP's 'KejriWall' Ad With '2 X Jumla Proof' Version; Watch Videos.

Who is BJP's CM candidate? Our graphics guy is waiting. https://t.co/RELffdHNk2 pic.twitter.com/WNKIQ8z8vS

This is considered to be reply of the political jibe by BJP's MP from East Delhi, who referred Delhi CM Arvind Kejriwal as 'dictator'. In the tweet, Gambhir had put faces of Kumar Viswas, Yogendra Yadav, Prashant Bhushan and Shajia Ilmi as victims of Kejriwal's dictatorship. Gambir had written, "Real Civil War. Not a FAKE manufactured one. P.S.: Get a better graphics guy. My face has not been superimposed properly."

Not a FAKE manufactured one

P.S.: Get a better graphics guy. My face has not been superimposed properly https://t.co/YWa9H2zS1U pic.twitter.com/O5X6tDSz9W

Earlier too, Aam Aadmi Party (AAP), Congress and BJP have used television advertisements to jab each other. The two parties -- AAP and Congress, on social media, uploaded edited versions of two popular TV ads in a bid to deride each other. Even political jab on Manoj Tiwari is being circulated over WhatsApp, who is one of the front runners for CM of Delhi from the BJP side. The election of Delhi will take place on February 8, 2020 and the results would be announced on February 11, 2020.