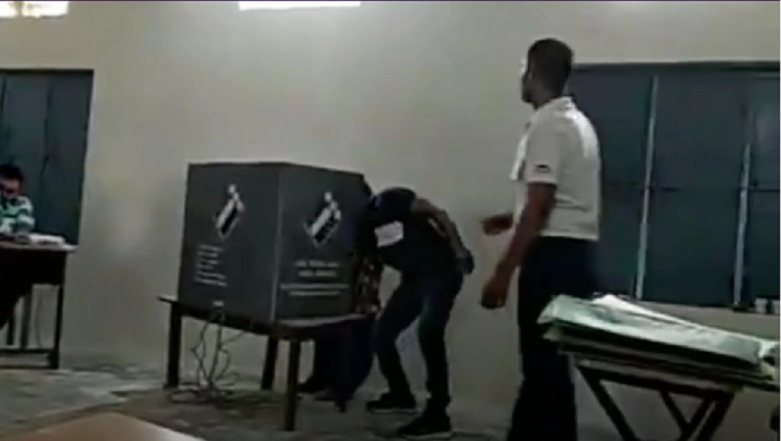 New Delhi, May 13: A polling agent in Haryana's Faridabad was arrested on Sunday after a video of him allegedly trying to influence voters went viral on social media. The incident took place while polling in Faridabad was underway in the sixth phase of polling on Sunday, May 12. District Election Office of Faridabad, on its official Twitter account informed that polling was not compromised in the booth and the officer was arrested and put behind bars soon after the incident was reported. Who Will Win Chhattisgarh, Punjab, Delhi And Haryana Lok Sabha Elections 2019? Here's What Opinion Poll Predicts; Watch Video.

A close look at the video shows a man in a blue t-shirt (polling agent), kept walking up to the polling booth and appears to be showing to the party symbol on the EVM, that for at least three voters. The District Election Office, Faridabad, on its official Twitter account, posted, “Prompt action taken. FIR lodged. Person behind bars. Observer inquired the matter personally and is satisfied that polling was never vitiated.”

The person in the video is the Polling agent who has been arrested in the afternoon itself. FIR lodged. He was trying to effect at least 3 lady voters. Observer & ARO with teams visited the booth at Asawati in prithala constituency. He is satisfied that voting was never vitiated

Reports inform that the incident took place inside a polling booth at Asaoti in Faridabad’s Prithala. After the video went viral on social media, several users tagged the Election Commission on Twitter asking for action to be taken against the man.

Here's the Video That Went Viral on Social Media:

After the incident drew a backlash on social media, senior Election Commissioner Ashok Lavasa took to Twitter to respond to the incident and assured strict action “against those found wanting in their duty.” “DEO Faridabad reported that the observer, Sanjay Kumar investigated the entire matter. Report of the observer will be examined by ECI and action will be taken against those found wanting in their duty,” he tweeted.

The person in the video is the Polling agent who has been arrested in the afternoon itself. FIR is lodged. Report of observer will be examined by ECI

Lok Sabha Elections 2019, which will be held in seven-phases, began on April 11 and will conclude on May 19. The results will be announced on May 23. The sixth phase of Lok Sabha elections held on Sunday covered 59 seats across seven states. The polling saw a voter turnout of 63.3 per cent which was less than 65.67 per cent recorded in 2014 for the same seats, the Election Commission said on Sunday.