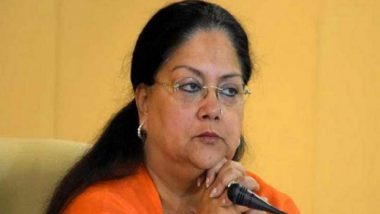 “Former CM Vasundhara Raje spoke to MLAs close to her in @INCRajasthan on phone and asked them to support @ashokgehlot51. In both Sikar and Nagaur districts, she spoke to the Jat MLAs and asked them to maintain distance from @SachinPilot. We have strong proof of this!” Beniwal tweeted.

Meanwhile, Sachin Pilot and 18 other MLAs on Thursday approached Rajasthan High Court to seek cancellation of disqualification notice issued by assembly speaker CP Joshi insisting that they cannot be disqualified for disagreeing with decisions and policies of some Congress leaders. Meanwhile, the matter has been deferred to Friday.

(The above story first appeared on LatestLY on Jul 16, 2020 07:53 PM IST. For more news and updates on politics, world, sports, entertainment and lifestyle, log on to our website latestly.com).