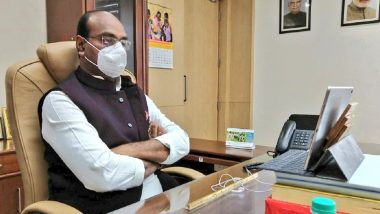 Bhopal, August 9: Bharatiya Janata Party (BJP) leader and Madhya Pradesh Minister Vishvas Sarang tested positive for the novel coronavirus. The 48-year-old was diagnosed with mild symptoms was yet to be hospitalised. He tweeted on Sunday to inform that the second report of his swab samples were found to be positive for the virus causing COVID-19.

Sarang's first test report, which was released earlier this week, showed him as negative for the contagious disease. Since his samples were collected, the Minister has remained in home isolation. He appealed on Twitter to those who came in contact with him to undergo COVID-19 testing. Karnataka Health Minister B Sriramulu Tests COVID-19 Positive, Days After CM BS Yediyurappa.

"Today, my second COVID19 test report was positive. I am in home isolation since the first test report was negative. I request you all who have come in contact with me to get all COVID-19 tests conducted," he said in a tweet in Hindi.

Several MLAs and some Ministers in Madhya Pradesh have contracted the virus so far. On July 29, Water Resources Minister Tulsi Silawat and his wife's samples were found positive for the contagious disease. BJP state president VD Sharma and state organisational secretary Suhas Bhagat were also found diagnosed with the virus last month.

Chief Minister Shivraj Singh Chouhan, who had contracted the infection last month, successfully recovered and was discharged from the Bhopal-based COVID-19 medical facility on Wednesday. The state has so far confirmed 39,025 cases of coronavirus, including 996 deaths.

(The above story first appeared on LatestLY on Aug 09, 2020 08:59 PM IST. For more news and updates on politics, world, sports, entertainment and lifestyle, log on to our website latestly.com).