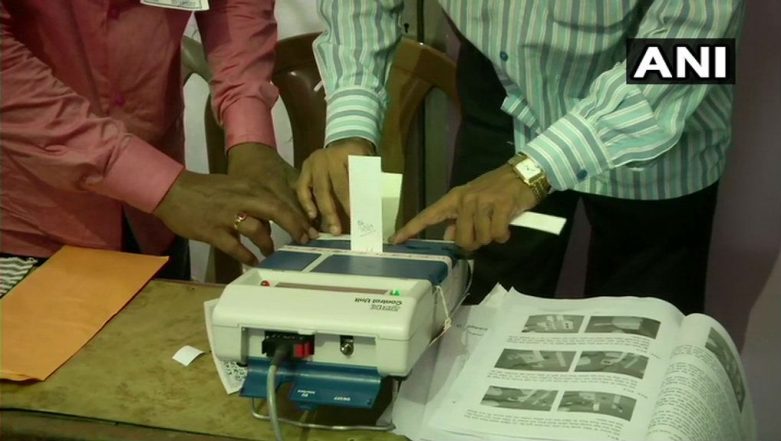 Shimla, May 19: It may be strange but true! The world's highest polling station at 15,256 feet in Tashiganag village of Himachal Pradesh Sunday recorded an unbelievable, 132 per cent voter turn out -- all valid votes. Against merely 49 registered voters figuring in the village electoral roll, a total of 65 voters have cast their votes till 3 pm at the Tashigang polling booth, said a district election official. Exit Poll Results For Lok Sabha Elections 2019 LIVE News Updates: BJP Set to Sweep Delhi And Haryana, Say Predictions.

The unbelievable spike in the poll percentage was attributed to the desire of many poll officials, deployed at polling booths in the Tashiganag village and other nearby areas to cast their votes at the world's highest polling station, located at a dizzying height of 12,256 ft.

Poll officials said the poll percentage is likely to rise further as out of 49 voters, registered in the village electoral roll, merely 33 have cast their votes till 3 pm. With the remaining 16 village voters and many other poll officials deployed in nearby polling stations likely to exercise their franchise at the world's highest polling booth by the end of voting process at 6 pm, the poll percentage is likely to go up further, they added.

The poll officials cast their votes at Tashigang polling booth after showing their election duty certificate (EDCs) issued to them by concerned assistant returning officers, he added. Tashigang is a village near an ancient monastery in Himachal Pradesh. It is the highest settlement in Spiti Valley near the India-Tibet border with villages Nako and Khab located nearby and is connected to Shimla by National Highway 22.

Tashigang acquired the unique distinction of becoming the highest polling station during Himachal Pradesh assembly elections in 2017, when the erstwhile polling station at the highest altitude of 14,400 ft was replaced by Tashigang due to some technical reasons, said HP's Assistant Chief Electoral Officer Harbans Lal Dhiman.

Hikkim is located 160 km from Tashigang. The polling at Tashigang began at 7 am when the temperature was below freezing point. Voters came to the polling station wearing their traditional attire to beat the chilly weather. Besides Tashigang, Himachal has another unique polling station, Ka, with lowest number of voters. Located in Sipti valley itself, Ka has only 17 registered voters. The poll officials were yet to release the voter turnout at Ka.

Both Tashigang and Ka polling stations fall under the Mandi parliamentary seat where the highest number of 17 candidates among the four Lok Sabha seats in the state are in the fray.

Mandi is witnessing a direct contest between the BJP and the Congress.

Former Union Minister Sukh Ram's grandson Aashray Sharma is pitted as a Congress candidate here against sitting BJP MP Ram Swaroop Sharma. Aashray's father Anil Sharma, who was a minister in the Jai Ram Thakur-led BJP government in Himachal, had to resign from the Cabinet as he was unwilling to campaign against his son to favour the BJP candidate. Lok Sabha Elections 2019 Phase 7 on May 19, Live News Updates: Voting For Final Phase of Parliamentary Polls Ends, 60.21 Voter Turnout Recorded.

Mandi being his home, Himachal Chief Minister Thakur's prestige is at stake here with veteran politician Sukh Ram too leaving no stone unturned to ensure his grandson Aashray's victory. Five MLAs, including a state minister, are among the 45 candidates trying to make it to the Parliament from the state where polling is underway. There are 53,30,154 registered voters for the four constituencies -- Shimla (SC), Mandi, Hamirpur and Kangra -- in the state.