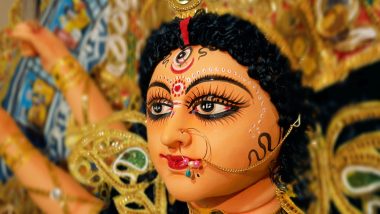 Mahalaya 2019 is here. And the next big question for every Bengali is to know about Durga Ashtami, Maha Navami and Vijayadashami or Subho Bijoya dates as per tithi calendar! Mahalaya is an auspicious day that marks the beginning of Devi Paksha after the end Pitru Paksha or Pitri Paksha (also known as Shradh or mourning period). The special day is believed to witness the arrival of Goddess Durga on the earth. It kicks off festival preparations as seven days later Kolkata’s biggest festival, Durga Puja or Durgotsav takes place. With Subho Mahalaya 2019 falling on September 28 (Saturday), it is time to check Durga Puja 2019 dates as per Bengali calendar. So, for people in Kolkata and outside, we bring a full Durga Puja 2019 calendar. It will have dates of Maha Sasthi, Maha Saptami, Durga Ashtami, Maha Navami and Vijayadashami in PDF format, and you can download it for free online. You will also find information on Akaal bodhan, Kalparambha, Kolabou Puja (Navpatrika Puja), Sandhi Puja, Navami Homa, Sindoor Khela and Durga Visarajan. Durga Puja 2019 Traditional Bengali Dishes: Kosha Mangsho to Muri Ghonto, Check Out the Finger Licking Non-Veg Food Recipes to Devour This Pujo.

Goddess Durga arrives with Goddess Saraswati, Goddess Lakshmi, Lord Ganesha and Lord Kartikeya. Durga Puja is celebrated during Devi Paksha which is 15 days period of Ashwin lunar month as per Hindu calendar. It coincides with Sharad Navratri, one of the four Navratris celebrated across the country. While Navratri is a nine-day festival observed in the Northern, Central and Western parts of the country, Durga Puja is a five-day festival that begins on from Navratri Day 5. Durga Puja 2019: If You Do Not Find These 5 Types of Pandal Hoppers During Pujo, Are You Even in Bengal?

Shashthi, the sixth day or tithi of a Devi Paksha or fourteen-day phase of the moon marks the beginning of Durga Puja celebrations. Akaal bodhan (incarnation of Goddess Durga) and Kalparambha are two important rituals conducted on Maha Sasthi, which marks the beginning of Durga Puja in West Bengal. On Maha Saptami, devotees perform Kolabou Puja or Navpatrika Puja. Durga Ashtami will see rituals such as Sandhi Puja and Kanya Pujan. On Maha Navami (the ninth day of Devi Paksha), devotees perform Navami Homa. Finally, on Vijayadashami, it is believed Goddess Durga killed buffalo demon, Mahishasura and return to her heavenly abode. This is why, Goddess Durga is also known as Mahishasura Mardini. Durga Visarjan takes place on the last day but before this, women participate in Sindoor Khela. In this ritual, they apply vermillion on each other’s forehead.

As the Devi Paksha starts, let us also tell you about Maa Durga Aagman (arrival) and Prasthan (departure). According to legends, if Goddess Durga arrives on Tuesday or Saturday, then her vahan (vehicle) will be a horse. And this year as Mahalaya falls on September 28 on Saturday, Devi Durga is arriving on a horse. Though, Durga arriving on a horse is considered inauspicious and considered a sign of political unrest, war among nations, natural calamities. Nevertheless, devotees will pray to Maa Durga for her divine blessings and protection from all evils and hardships. Durga is a fierce form of the protective mother goddess and she will protect and care for all her children.

(The above story first appeared on LatestLY on Sep 28, 2019 11:39 AM IST. For more news and updates on politics, world, sports, entertainment and lifestyle, log on to our website latestly.com).