Hindi Diwas 2019 Date and Information: Know All About The History of The Day That Highlights Importance of Hindi Language 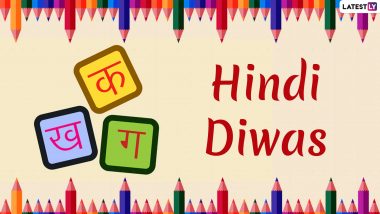 National Hindi Diwas is observed on September 14 every year to celebrate the essence of Hindi language. On this day, the central government organises various events and programmes highlighting the importance of Hindi as a language. Various private organisations also celebrate the day trying to bring to the forefront of the beauty of Hindi. On September 14 in 1949, the Constituent Assembly of India had adopted Hindi written in Devanagari script as the official language of the Republic of India. As the day approaches, we have compiled information on Hindi Divas. GIF Images, WhatsApp Messages, Facebook Status & SMS to Wish 'Hindi Diwas Ki Shubhkamnaye'.

Several stalwarts had rallied for the creation of this day. Some of the notable people who debated it in the Parliament include Beohar Rajendra Simha along with Hazari Prasad Dwivedi, Kaka Kalelkar, Maithili Sharan Gupt and Seth Govind Das.

National Hindi Diwas is different from World Hindi Day which is celebrated on January 10 every year. World Hindi Day marks the anniversary of first World Hindi Conference which was held in 1975. In 2017, Union Minister Harsh Vardhan said that Hindi is the fourth language of the world.

(The above story first appeared on LatestLY on Sep 10, 2019 06:08 PM IST. For more news and updates on politics, world, sports, entertainment and lifestyle, log on to our website latestly.com).