For centuries, such lefthanded talents have been contributing to global success and serving mankind but It was only in 1976 that the world celebrated the first-ever 'International Lefthanders Day' on 13th of August. The celebration is aimed at acknowledging the achievements of lefties and raising awareness regarding the ordeals and challenges. 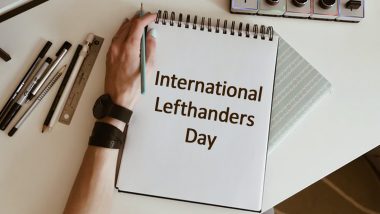 There was a time, in around 1600s, when Lefthanders were accused of practising witchcraft. But as centuries passed, the world witnessed births and reigns of some extraordinary people, all lefties, who changed the world forever. Some of these include unforgettable names like that of Leonardo da Vinci, Napoleon Bonaparte, Albert Einstein, Julius Caesar, Marie Curie, Aristotle, Neil Armstrong, Henry Ford, Pele, Winston Churchill, Prince William, Prez George Bush, Prez Bill Clinton, Prez Barack Obama, Bill Gates, Amitabh Bachchan, Sachin Tendulkar, Eminem, Charlie Chaplin, Tom Cruise and so many other. International Lefthanders Day 2020: Fascinating Facts About Lefties That Make Them So Rare Yet Special.

For centuries, such lefthanded talents have been contributing to global success and serving mankind but It was only in 1976 that the world celebrated the first-ever 'International Lefthanders Day' on 13th of August. The celebration is aimed at acknowledging the achievements of lefties and raising awareness regarding the ordeals and challenges that are faced by them in a world that is designed for right-handers. International Lefthanders Day 2020 Date and History: Know Significance of This Day That Honours Lefties.

Scientists have tried to study and identify differences in parts of the DNA of both lefties & right-handers. This 2019 study, which was based on brain scans of 9,000 British subjects, found that in Lefthanders, the parts of the right and left sides of the brain that process language work in better tandem. Other well-known facts say that lefthanded folks score higher on verbal reasoning, are more likely to struggle in school-life, but have an edge in sports like boxing or fencing, where they can easily surprise their opponents who are used to competing with mostly right-handers.

It is said that only 10%-15% of the population is lefthanded around the globe. Thus, many basic items like scissors, toys, vehicles and even school desks are specially designed for lefties and are much costlier than the ones used by their right-handed counterparts.

Some Indians who have made the left-handed world proud are Mahatma Gandhi, Amitabh Bachchan, Ratan tata, Karan Johar many Indian cricketers and more. In China, Japan and other Asian countries, the percentage of Lefthanders is much smaller than in the West. Another surprising fact is that four out of the six recent US Presidents were Lefthanders. These were Ronald Reagan, George Bush, Bill Clinton, and Barack Obama.

Why and How is the Day Celebrated Globally?

The aim is to promote awareness about the struggles of lefties in a largely right-handed world. Understanding their daily-life difficulties like how they have to drive on right side of the road, use right-handed tools, use vehicles that are designed for right-handers.

Thus, International Lefthanders Day is celebrated globally to put an end to discrimination against the lefties. On this day, activities like left-handed tea parties, pubs using left-handed corkscrews as well as organising games to be played using just the left hand, left-v-right sports matches etc are held around the globe.

(The above story first appeared on LatestLY on Aug 12, 2020 09:03 PM IST. For more news and updates on politics, world, sports, entertainment and lifestyle, log on to our website latestly.com).