Happy Women’s Day 2019 Videos: These Empowering Ads by Indian Brands Are a Must See on March 8 (Watch TVC Videos)

It is impressive that digital-focused brands of today understand the importance of capturing the attention of their followers through meaningful marketing efforts. 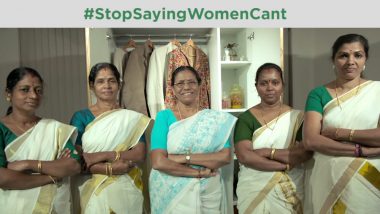 International Women’s Day observed on March 8 is a global celebration of the social, economic, cultural, political and every achievements of women that serve to champion women’s rights, female empowerment and gender equality. March 8 is officially dedicated to all the women's struggles and accomplishments achieved so far. Thanks to cultural and societal shifts as encouraged by movements such as #MeToo, Women's Day 2019 has become increasingly prominent and is now recognised by millions around the world. It is also another day when popular brands try a wee bit harder to wedge themselves into popular culture with a number of ads, stunts, marketing gimmicks and social media shenanigans. And some of them are pretty impressive. Like every year, this year too, Indian companies such as Arial, Greenply Plywood, Prega News and some more have empowering content to offer and celebrate International Women’s Day on March 8, 2019. These empowering ad videos are a must watch.

#ShareTheLoad is undoubtedly one of the successful campaigns of Ariel so far. Removing the stains of gender inequality, the company has managed to build a social property, crafting an initiative that sprints beyond social media marketing. On the occasion of International Women’s Day, Ariel’s #ShareTheLoad is back to raise yet another pertinent question on the upbringing of children. Through this ad, the company urges mothers to be the flag-bearers of change and relook at the way they are raising their son so that they can be equal partners in the future. #MeToo, #TimesUp, #IBelieveHer, Feminist Hashtags Started by Women for Women.

The phase of pregnancy is not easy, but a lot depends on the loved ones around the expecting mother, who make it seem like a breeze. Prega News has been known to raise the right issues around motherhood with its multiple campaigns and strike the accurate chord with its audience. For 2019 International Women’s Day, the company introduced a thoughtful video campaign on the digital forum—#YourSecondHome, and it is gaining praises already. The 3 minutes video features a regular day in an ordinary household where the woman of the house treats her househelp a little differently, from other days. Towards the end of the video, the househelp was visibly hurt by the owner’s demeanour, but realises the compassion and kindness behind it all. Stop Saying These Things To Women NOW!

With its recent campaign #StopSayingWomenCant, Greenply Plywood has announced its initiative by empowering women in the male-dominated carpentry artistry. Partnering with Archana Women’s Centre, an NGO based in Kerela, Greenply employed women who hail from the poorest of the villages with primary or no education and now are being trained in carpentry. Through the video, the company just makes one appeal to all—stop saying, ‘women can’t’. 11 Inspiring Lines from Powerful Women Who Run the World!

For International Women’s Day 2019, Candere by Kalyan Jewellers has launched a campaign breaking the walls for women to retain their identity as an individual. #EkZindagiKhudKeNaam roughly translated to “a life dedicated to your own self,” this campaign celebrates women and their passion, dreams, strength and above all their individuality. With an empowering note that ends on, Kabhi kabhi mere dil me khayaal aata hai, ki jaise tujhko banaaya gaya hai sirf tere aur tere liye, the company quashes all those notions, acknowledging that women have an identity of their own and all they do, is for themselves and not to impress someone else. 13 Powerful Women in Indian Politics.

Brands have often come up with ad campaigns that have women as the protagonist delivering the core idea, but not everyone manages to showcase empowerment through their product communication. It is impressive that digital-focused brands of today understand the importance of capturing the attention of their followers through meaningful marketing efforts. These Indian advertisements not only managed to deliver empowering messages, but also make the communication fun and direct. Happy International Women’s Day!

(The above story first appeared on LatestLY on Mar 08, 2019 08:42 AM IST. For more news and updates on politics, world, sports, entertainment and lifestyle, log on to our website latestly.com).