Martyrs' Day 2022 in India: Know Dates of Six-Declared Sarvodaya Day or Shaheed Diwas in the Country, History and Significance

Martyrs' Day or Shaheed Diwas is observed on different dates in India. Each day has its own revolutionary story and history which we must know. At the national level, the dates are referred to as Sarvodaya Day. Scroll down to read about the six declared Martyrs' Day in India. 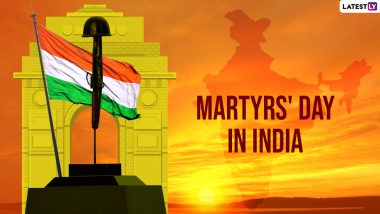 The term Martyr means "a person who voluntarily suffers death as a penalty or is killed because of their religious or political beliefs, and is often admired because of it".  In India, there are six days declared as Martyrs' Day or Shaheed Diwas in Hindi. At the National level, the day is known as 'Sarvodaya Day' also. The days are commemorated annually in honour of those who are recognized as the martyr of the country. Following are the dates of the six Martyrs' Day in India, and the history and significance behind observing the day. January 2022 Holidays Calendar With Festivals & Events: Know All Important Dates and List of Fasts for the Month.

Martyrs' Day is observed every year on January 30th to mark the death anniversary of the father of the nation Mohandas Karamchand Gandhi who was assassinated by the Hindu extremist Nathuram Godse in 1948.  On this day the inter-services contingent reverse arms as a mark of respect and the President, prime minister, and defense personnel lay wreaths of flower at the samadhi at Raj Ghat Memorial.

Every year 23rd March is observed as Shaheed Diwas or Martyrs' Day to mark the death anniversary of Bhagat Singh, Sukhdev Thapar, and Shivaram Rajguru. It was on the same date in Lahore, Pakistan that these three freedom fighters were hanged to death for assassinating John Saunders, a British police officer in 1928.

The day is observed as  Police Martyrs' Day or Police Commemoration Day in honour of the Central Reserve Police Force patrol. On this date in 1959, at the Indo-Tibetan border in Ladakh, the police force was ambushed by Chinese forces, as part of the ongoing Sino-Indian border dispute.

The day is widely observed in Odisha as the death anniversary of Lala Lajpat Rai, one of the prominent figures of the freedom struggle. He was given the title of  “Lion of Punjab” or "Punjab Kesari" for his ideologies.

The day is marked as the death anniversary of Guru Tegh Bahadur who was the ninth of ten Gurus who founded the Sikh religion and the leader of Sikhs from 1665 to 1675.

On these dates, Indians pay tributes to the people who had lost their lives in the struggle for India's independence or for those who died fighting against injustice and discrimination. Although we should always remember all the heroes and their priceless sacrifices for the country we mainly commemorate them on these six days.

(The above story first appeared on LatestLY on Jan 28, 2022 01:53 PM IST. For more news and updates on politics, world, sports, entertainment and lifestyle, log on to our website latestly.com).