National Day 2022 in United Arab Emirates: Know Date, History and Significance of the Day That Marks the Foundation of the Emirates as One United Nation 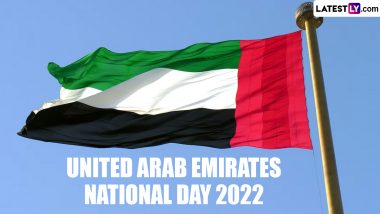 United Arab Emirates National Day is celebrated on December 2 every year. On this day, the masterminds behind the formation of the UAE are honoured and remembered for their significant contributions. The seventh emirate, Ras al Khaimah, was added to the federation on 10 February 1972 making it the last emirate (state) to join. This year on December 2, 2022, the Emirates will celebrate its 51st anniversary. Top 7 Tourist Attractions in the United Arab Emirates That One Must Visit.

The history of United Arab Emirates National Day dates back to 1968. The UAE was a separate country before 1960, which was once ruled by the colonial powers, first the Spanish in the 16th Century, then by Britain in the 17th Century. In 1820, the sheikhdoms signed the Trucial Sheikhdoms Treaty with the British government, which declared that Britain would safeguard the Gulf if the sheikhdoms agreed not to give up property for any business with other governments without prior authorisation. By the 1960s, Britain ended its pact with the Trucial sheikhdoms. After the pact of British protection expired in December 1971, the sheikhdoms of Bahrain and Qatar attempted to form a union, but both became independent countries. The rest of the Gulf States, including Dubai and Abu Dhabi, joined the other emirates on December 2, 1971, and the United Arab Emirates was established.

United Arab Emirates National Day also falls on the anniversary of the federal unification of the six emirates (seven in 1972 after Ras Al Khaimah joined) in 1971 which combined to form the modern-day country, headed by Sheikh Zayed bin Sultan Al Nahyan, the federation's first president. Recently, the UAE National Day has been combined with Emirati Martyr’s Day which is on November 30.

On this day, people celebrate the national day with fireworks and grand celebrations. Shopping centres, malls, and institutions are decorated with the flag. Heritage Villages are set all over the UAE in order to celebrate this event traditionally. Holidays are given from National Day until two days later. Events and fireworks to other entertainments will be a grand celebration to make the day historic.

As per records, over 57% of UAE residents anticipate seeing fireworks during the UAE National Day weekend. On National Day of UAE, people decorate their homes, workplaces, cars and streets to celebrate the day. Palm trees are decorated with lights from the colours of the flag. Downtown Dubai is lightened with fireworks while the Burj Khalifa displays the UAE flag.

(The above story first appeared on LatestLY on Dec 01, 2022 11:00 AM IST. For more news and updates on politics, world, sports, entertainment and lifestyle, log on to our website latestly.com).