PN Panicker: On National Reading Day 2021, Here’re Little-Known Things About ‘The Father of the Library Movement’ Who Promoted Literacy in Kerala

To honour the legacy of P.N. Panicker, the 26th edition of National Reading Day 2021 will be celebrated on June 19. P.N. Panicker is known as the 'Father of Library Movement' in Kerala. 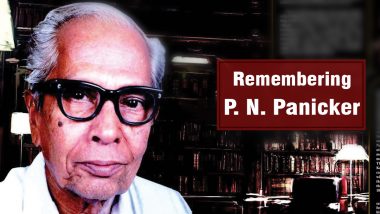 Puthuvayil Narayana Panicker is popularly known as the Father of Library Movement as he helped the citizens of Kerala to get access to educational material easily by establishing libraries across the state. To promote literacy in Kerala, he had made significant contributions, which finally led to universal literacy in ‘God’s own country’. He worked hard and gave a great push to the Kerala State Literacy Mission. He almost single-handily made Kerala the universal literate state. Panicker transformed the literacy landscape in the state.

Why P.N. Panicker is Known as the Father of Library Movement?

PN Panicker was born to Govinda Pillai and Janaky Amma on March 1, 1901, at Neelamperoor, Kerala. When he grew up he became a teacher. It is believed that as a teacher his influence on society was much bigger than several in his time. The citizens of Kerala believe that his profession as a teacher inspired him to raise awareness about the importance of literacy among the masses of Kerala. As a teacher, he started Sanadanadharmam Library in his hometown.

Later, the success of his venture doubled when he initiated the formation of Thiruvithaamkoor Granthasala Sangham, commonly known as the Travancore Library Association in the year 1945. As many as 47 libraries across the rural areas in the city were part of the association. The main objective of the association for setting up these libraries was to highlight the importance of reading, study and education in rural areas. ‘Read and Grow’ was the impactful slogan of the association.

Under the organization, Panicker was able to set up over 6,000 libraries across the state.  And thus, P.N. Panicker is known as the Father of Library Movement in Kerala. Later, the association was eventually taken over by the state government, which is currently known as the Kerala State Library Council.

P.N. Panicker’s library association was taken over by the state government after the formation of Kerala state in 1956. However, till 1977, Panicker held the position of General Secretary of Sangham almost for 32 years. During this time, to promote the importance of reading and education, he travelled to various underdeveloped areas and villages of Kerala.

Panicker was disappointed by the political influence and thus, in 1977, he decided to form the Kerala Association for Non-Formal Education and Development (KANFED), which led to the start of the Kerala Literacy Mission. And his mission helped Kerala to achieve a 100% literacy rate and to become the first state in the nation to achieve universal literacy.

What is the Significance of National Reading Day?

(The above story first appeared on LatestLY on Jun 19, 2021 08:00 AM IST. For more news and updates on politics, world, sports, entertainment and lifestyle, log on to our website latestly.com).