World Day to Combat Desertification and Drought 2021 Date and Theme: Know History and Significance of The Day That Focuses on Turning Degraded Land Into Health Land 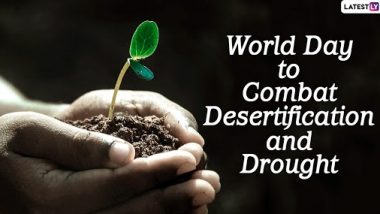 Nearly 75 percent of the Earth's ice-free land has been altered by humans to meet the ever-growing demand for food, homes, highways and raw materials. "Avoiding, slowing and reversing the loss of productive land and natural ecosystems now is both urgent and important for a swift recovery from the pandemic and for guaranteeing the long-term survival of people and the planet," the United Nations said.

(The above story first appeared on LatestLY on Jun 17, 2021 08:33 AM IST. For more news and updates on politics, world, sports, entertainment and lifestyle, log on to our website latestly.com).