World No Tobacco Day 2021: Everything You Need To know From Date, History, To The Significance Of This Day

Each year, World No Tobacco Day is celebrated on May 31 to raise awareness about the perils of smoking. It gives smokers an opportunity to reassess their lives, give up the smoke and lead a healthier life. 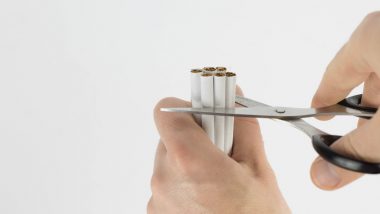 World No Tobacco Day (Photo Credits: Wikimedia Commons)
Each year, World No Tobacco Day is celebrated on May 31 to raise awareness about the perils of smoking. It gives smokers an opportunity to reassess their lives, give up the smoke and lead a healthier life.  According to WHO "This yearly celebration informs the public on the dangers of using tobacco, the business practices of tobacco companies, what WHO is doing to fight the tobacco epidemic, and what people around the world can do to claim their right to health and healthy living and to protect future generations." It's never too late to quit smoking and commit to living.

World No Tobacco Day originated from the Member States of the World Health Organization created World No Tobacco Day in 1987. They dedicated this day to raise awareness and focus on the insidious diseases attached to tobacco that leads to insurmountable deaths. The WHO believed that these deaths were preventable and decided to draw global attention to the tobacco epidemic and the disease it causes. In 1987, the World Health Assembly passed Resolution WHA40.38, which called for 7 April 1988 to be"a world no-smoking day." In 1988, Resolution WHA42.19 was passed, and we began the celebration of World No Tobacco Day, every year on 31 May.

According to WHO "Currently, over 70% of the 1.3 billion tobacco users worldwide lack access to the tools they need to quit successfully. This gap in access to cessation services is only further exacerbated in the last year as the health workforce has been mobilized to handle the pandemic."

In order to encourage people to quit tobacco, the theme of 2021 will be "Commit To Quit."The campaign will empower 100 million tobacco users to quit smoking by organising events and will reach out to people using social media.  This will aim to create a support network that will offer adequate tools for tobacco users to quit successfully.

(The above story first appeared on LatestLY on May 27, 2021 07:01 PM IST. For more news and updates on politics, world, sports, entertainment and lifestyle, log on to our website latestly.com).