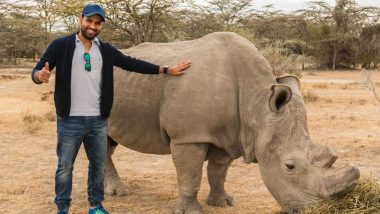 Mumbai Indians captain and team India vice-captain Rohit Sharma has been a supporter of conservation of Rhino and has been leading the awareness campaign for the protection and the greater need to conserve Rhinos. Rohit has also launched his own campaign called the Rohit4Rhinos campaign, in partnership with WWF India and Animal Planet, to help in creating awareness for the need to conserve the Greater One-Horned Rhinoceros or the Indian Rhino. On World Rhino Day 2020, take a look at times Rohit Sharma vouched for the conservation of Rhinos across the universe. World Rhino Day 2020 Date, History and Significance: Know Everything About the Day Dedicated to Raise Awareness and Protecting the Rhinoceros.

World Rhino Day is celebrated each year on September 22. The day was first observed in 2011. It was first planned by the World Wildlife Fund, South Africa in 2010. The next year they were joined by Lisa Jane Campbell of Zimbabwe and Rhishja Larson to promote World Rhino Day. Since then, World Rhino Day is celebrated every year on this day which the world observes to create awareness and the importance of the conversation of rhinos. Take a look at some posts from Rohit Sharma on the conservation of Rhinos.

There are approx. 3500 #Greateronehornedrhinos in the world today; 82% of them in India. Join me to #batforrhinos on #worldrhinoday and support measures to protect these animals in the wild. Log onto https://t.co/Qnhv9NhdHu to support the cause. @WWFINDIA @AnimalPlanetIn pic.twitter.com/iMUy315MAr

It's been a great start to 2020 with 2 new rhino calves being born in Manas National Park within a month! Let us come together to help protect these new #rhino calves & give them a safe habitat to grow in. Help me support @wwfindia nurture the #IndianRhino! (link in the bio)

This #WorldWildlifeDay, let's talk about my favourite animal Indian Rhinoceros! @wwfindia is working tirelessly to protect & conserve #Rhinos. I am Rohit Sharma & I #bat4rhinos. I am calling out to all my fans - help protect the mighty #IndianRhino (link in the bio)

I have always cared about the Indian Rhinos & am speaking up for these mighty beings. Conserving #Rhinos is like having #extracover to protect them and their home #grasslands. Come support me & @wwfindia - let's hit this out of the park. Click the link in my bio to support the cause.

Rohit Sharma Calls Out Fans to Help Save Rhino Species

I am Rohit Sharma & I #bat4rhinos. I am calling out to all my fans to help protect the mighty #indianrhino. @wwfindia

Rohit launched his Rohit4Rhino campaign on World Rhino Day last year and has been using the campaign to create awareness about the conservation of Rhino in India. He had joined WWF India as its brand ambassador for Rhino Conservation in 2018.

He also dedicated his T20I century in England in 2018 to Sudan, the world's last male northern white rhino, who died in March earlier that year. Apart from Rohit, Kevin Pietersen has also been vocal about the conservation of Rhinos and also campaigns worldwide for saving and protecting the species.

(The above story first appeared on LatestLY on Sep 22, 2020 08:10 AM IST. For more news and updates on politics, world, sports, entertainment and lifestyle, log on to our website latestly.com).