Dalgona Coffee Origin: Did You Know Dalgona Is a Beloved Candy Found in South Korea? Here’s the Story Behind Internet’s Favourite Whipped Coffee 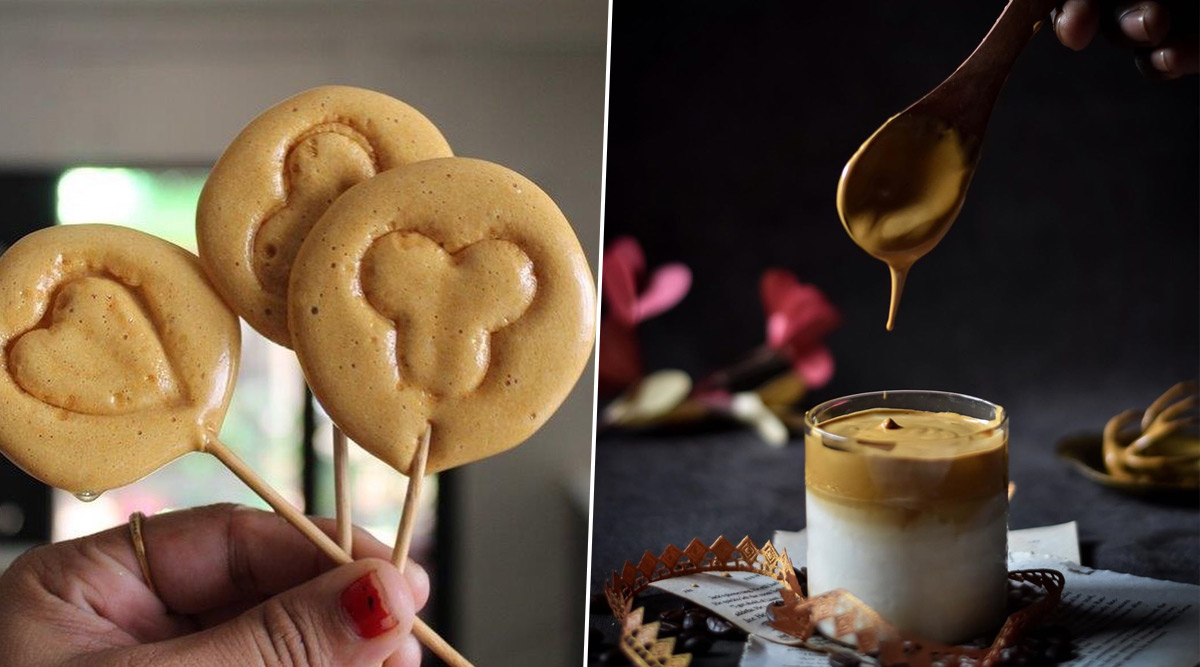 The world is going crazy over the thick whipped coffee, aka Dalgona Coffee. Almost everyone has made it or at least attempted! And the results are across social media. But why is it in trend? What is so special about it? What’s with the name? As per the information available on the internet, the drink was first made popular by a South Korean actor, Jung Il-woo who was served this beverage to his visit in Macau. Other sources state that it originated from a South Korean YouTube channel before it went viral on TikTok. It is yet to be ascertained if the stories to true, but it hints the social media craze with roots in South Korea. It is actually a street treat for Koreans. Dalgona is a beloved candy found on the streets of South Korea, extremely popular in the 1970s and 1980s. In this article, know the story of the origin of Dalgona coffee. Here's How to Brew the Perfect Beverage Quickly at Home; Watch Videos of Whipped Coffee Going Viral on Social Media.

Dalgona is a popular treat found in the streets of South Korea, especially during the 70s and 80s. South China Morning Post in an article noted that dalgona was created after the Korean War (1950-53), during which the US Army personnel gave out sweets to local children. Parents unable to afford such treats, made their own versions, dalgona. In the South Korean streets, dalgna is sold, resembling large lollipops with the outline of shape—a heart, star or any simple design pressed at the centre. You are supposed to eat the dalgona around the outline without breaking the shape in the middle. From M&M'S to Wafer Rolls, Twitterati Experiment With Their New Favourite Beverage.

How to Make Dalgona?

The sweet candy is made by mixing sugar with water and boiling it until it starts turning slightly yellow. Add some baking soda, stir it until the mixture begins to puff up. Press it onto a flat surface and decorate it with various stencils. Once cooled, add a stick and serve the sweet and spongy dalgona. Keto Dalgona Coffee Recipe: Here's How You Can Brew Low-Carb Version of The Viral Beverage Easily at Home!

It is very easy to make! Now that you have mastered the art of making a Dalgona Coffee, maybe you can test your skills in Dalgona Candy. Remember, you are not supposed to break the shape at the centre!