Halal and Jhatka Meat: What’s The Difference and How Does It Affect the Taste of the Meat?

If you are a non-vegetarian foodie, we know you take meat seriously. But for the religious folk, it does. Muslims are prohibited from eating jhatka meat for religious reasons and are asked to eat halal instead. Religious reasons aside, is there a difference in the way both the meats taste? 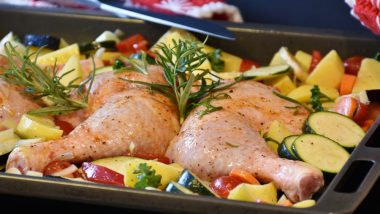 To halal or not to halal. In recent times, the halal versus jhatka debate has reached serious proportions in India, especially on social media. Not too long ago, Zomato landed itself in a soup when right-wing social media groups attacked it for upholding its halal policy. The latest one to face their ire is McDonald’s India who also serves halal instead of jhatka meat. Several right-wing Hindus on Twitter have accused the two of pandering to Islamic food codes. Their argument is that India is a Hindu-majority country. So the food codes should be according to what Hindus want. While we are leaving the religious debates aside, let’s discuss the difference between halal and jhatka meat and whether it makes any difference to the taste.

Halal Meaning: Halal translates to 'permissible' in Arabic. In the halal method, animals are slaughtered with a deep cut across their neck. The cut severs the windpipe, jugular vein and carotid artery of the animal in one stroke. Here, the animal dies slowly, since the blood takes more time to drain out completely.

Meat grade: Draining all the blood from the animal ejects most of the toxins from its body and makes the meat softer and juicier. Such meat is known to stay fresh for a longer time. Meat Safety: The Right Way to Buy, Store and Cook Meat to Avoid Falling Sick

Jhatka Meaning: Jhatka in Hindi translates to 'swift'. This method of slaughtering animals involves severing its head in one powerful blow and the animal is killed instantly and almost painlessly.

Meat Grade: Chances of blood clot are higher when all the blood does not drain out from the animal. So if you are buying jhatka meat, make sure that you clean and cook it instantly to avoid spoilage. Besides, the meat can become drier and tougher if it is kept uncooked for a longer time, making it difficult to chew. So make sure you cook it on time. Processed Meat Linked To Breast Cancer: Other Health Reasons To Avoid Sausages, Hot Dogs and Bacon.

While we still can't conclude which meat is better tasting, halal meat perhaps stays longer and shrinks less. That said, the taste and tenderness of the meat depend a lot on how it is cooked.  There is no clear winner.

(The above story first appeared on LatestLY on Aug 30, 2019 01:57 PM IST. For more news and updates on politics, world, sports, entertainment and lifestyle, log on to our website latestly.com).