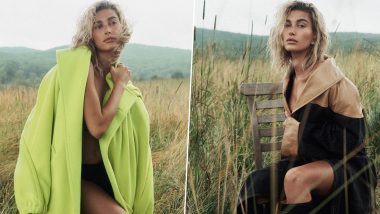 Hailey Bieber opens up about being jealous of Kendall and Gigi (Photo Credits: Instagram)

Hailey Bieber has confessed being jealous of her friends, Kendall Jenner and the Hadid sisters Gigi and Bella. While Hailey was a significant part of the model clan, we rarely see her without her boo ever since hers and Justin Bieber’s love story resumed. She walked for major brands, but we still didn’t see her as much as her friends on the runway. Now, the model is famous and known as “Justin Bieber’s wife” as it looks like she’s left the runway life behind to live a cosy life with her new husband. Justin Bieber is Excited But Anxious For His Wedding With Hailey Baldwin For This Reason!

Hailey Bieber or Baldwin, however, she’s going till the wedding ceremony, has opened up about her struggles in the modelling industry compared to her supermodel friends. For her October cover with Vogue Australia, when asked about her career as a model, Hailey responded with, “My burn in the modelling industry has been slow and I’ve had to learn to be okay with that. I’m shorter than most of the girls. Even though I’m five-foot-eight, I’m not a runway girl and I totally used to feel inferior to some of my friends. Look at Kendall [Jenner] and Bells [Bella Hadid] and Gigi [Hadid] … they’re all tall and doing every runway. For a while, there was a part of me that didn’t know if I could have the career I wanted if I couldn’t do runway. I don’t think that anymore. I had so many people, like casting directors, say: ‘We don’t think she’s a real model.’. Justin Bieber and Hailey Baldwin Set the Date for Their Second Wedding - Read All Details Inside.

Hailey Bieber has now found her lane and thinks photographs work for her. She likes doing more ads and commercial modelling for brands, as photographs hide her height. Who knew 5’8 would be short. While Hailey stands at 1.71 metres in height, Kendall and Gigi both stand 1.79 metres tall and Bella follows with 1.75 metres. The three also walked Victoria’s Secret fashion show, which has very very stringent rules for casting models.

(The above story first appeared on LatestLY on Sep 16, 2019 09:27 AM IST. For more news and updates on politics, world, sports, entertainment and lifestyle, log on to our website latestly.com).