Jacqueline Fernandez Birthday Special: Here’s Workout And Diet of The Glamorous Bollywood Actress That Keeps Her Fit and In Perfect Shape! Watch Videos

Jacqueline Fernandez follows her workout routine with full dedication. Yoga and pilates are an integral part of the Bollywood actress training regime. The Kick actress loves to perform handstand and exercises on the Pilates reformer machine. 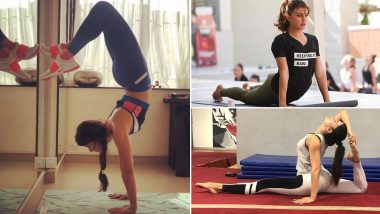 Jacqueline Fernandez turns 35 on August 11, 2020. One of the popular Bollywood actresses, the Sri Lankan beauty made her debut in the Indian film industry with the movie Aladin that released in the year 2009. It starred megastar Amitabh Bachchan and Riteish Deshmukh. However, it was her work in Race 2 that got her recognition. She later featured in blockbuster movies such as Kick, Housefull 2 and Housefull 3. Jacqueline won Miss Universe Sri Lanka in 2006 and represented her country at Miss Universe 2006. The beauty with brains, Jacqueline has been a cynosure of everyone's attention right from her modelling days, and later during her short stint as a television reporter in Sri Lanka. Blessed with great body, pleasing personality and a charming smile that lights up the screen every single time, Jacqueline has simply been a delight for the sore eyes. As she rings in her 35th birthday, let us take a look at the glamorous Bollywood actress workout and diet that helps her maintain core strength and remain in perfect shape, always. Jacqueline Fernandez Reminisces About Her Super Hit Songs ‘Beat Pe Booty’ and ‘Chandralekha’

Jacqueline Fernandez follows her workout routine with full dedication. Yoga and pilates are an integral part of the Bollywood actress training regime. The Kick actress loves to perform handstand and exercises on the pilates reformer machine. Jacqueline also incorporates weight training and strength development exercise like pull-ups in her programme. The pretty actress trains her core to perfection where she performs different forms of planks exercise. Jacqueline Fernandez also does meditation to keep her mind stress-free. When Jacqueline Fernandez Had Dinner Date With a Wild Chic Style in Tow!

Strength comes from within always! This is a really cool practice for the handstand which also helps to strengthen the back anddddd is an awesome stretch for the tummy!! Hopefully one day I’ll be able to do it without the mirror 🥵🤪 #happysunday in my fav @justf143

I have been dealing with some major anxiety these past few weeks.. however being consistent with yoga has taught me the valuable lesson of being in the moment and what’s even more important.. gratitude.. for life and being alive.. have a great day everyone! Namaste 🙏🏻

Just like the workout, Jacqueline is also very strict and disciplined about her diet. The Bollywood actress avoids eating refined sugar or any sweet items. She does have a cheat meal on special occasions, however, after that the actress ensures to burn it all out with rigorous workout. As per TOI, Jacqueline Fernandez includes quinoa regularly in her meal. She also has apple cider vinegar drink daily along with turmeric and ginger for super glowing skin. Green vegetables, bell peppers and sweet potatoes are also part of her daily diet. The Judwa 2 actress loves to have a bulletproof coffee which is an expresso shot that Jacqueline takes along with a little ghee and a spoon of coconut-based MCT oil. Also, the gorgeous actress takes her last meal at 7 pm in the evening.

(The above story first appeared on LatestLY on Aug 11, 2020 10:19 AM IST. For more news and updates on politics, world, sports, entertainment and lifestyle, log on to our website latestly.com).