Nipah Virus Scare in Maharashtra: Deadly Virus Found in Bats in Mahableshwar Cave, Know All About the Infection

Scientist from Pune-based National Institute of Virology (NIV) have detected Nipah virus in two species of bats in Maharashtra. 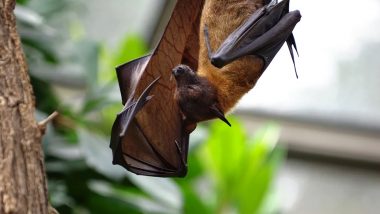 trapped from a cave in Mahableshwar in Satara district of Maharashtra in March last year. According to a TOI report, they trapped 65 leschenaultii and 15 pipistrellus bats and collected blood, throat and rectal swabs for research. This came to light after the findings were published recently in the peer-reviewed and indexed "Journal of Infection and Public Health".

"In investigations during the last decade, NiV (Nipah) activity could not be detected in leschenaultia bats, despite processing several hundred bats, including bats from the same location," the research paper reads. What Is Orthocoronavirinae? Know the Meaning, Origin and Sections of the Subfamily the Novel Coronavirus Is a Part Of.

What Is Nipah Virus?

According to US-based Centres for Disease Control and Prevention, Nipah virus is a zoonotic virus, meaning it initially spreads between animals and can transmit to humans. The animal host reservoir for NiV is the fruit bat, also known as the flying fox. The virus can transmit to humans if a person remains in close contact with an infected animal or its body fluids (such as saliva or urine) Once it spreads to people, person-to-person spread of NiV can also occur.

At initial stage, a person infected with Nipah virus may experience fever, headache, cough, sore throat, difficulty in breathing and vomiting. In severe cases, disorientation, seizures, coma and brain swelling may happen. Death may occur in 40-75% of cases.

There is no medicine or vaccine to prevent Nipah virus infection. According to the CDC, treatment is limited to supportive care, including rest, hydration, and treatment of symptoms as they occur.

(The above story first appeared on LatestLY on Jun 23, 2021 08:28 AM IST. For more news and updates on politics, world, sports, entertainment and lifestyle, log on to our website latestly.com).