They caused a series of incidents in Auckland and Hamilton like assault, refusing to pay for meals at restaurants, intimidating behaviour, littering, etc. 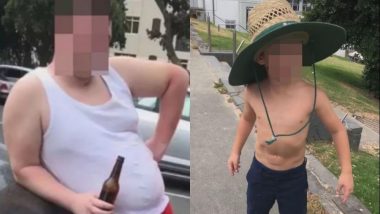 A group of Britishers holidaying in New Zealand were deported for their rowdy behaviour. Members of a British family have been accused of unruly behaviour "worse than pigs" by Kiwis. They caused a series of incidents in Auckland and Hamilton like assault, refusing to pay for meals at restaurants, intimidating behaviour, littering, etc.

Reportedly Auckland mayor Phil Goff demanded police action on a local radio station. He said, "These guys are trash. They are leeches," he told a local radio station. If you say one time 'I found a hair or an ant in my meal' you'd believe it but they find it every meal that they have as a way of evading payment. That's a criminal activity. They're worse than pigs and I'd like to see them out of the country." Drunk Flyer on Jet Airways Mumbai-Kolkata Flight Offloaded For Unruly Behaviour.

The family attracted immense media coverage in New Zealand after a video of a child in the group went viral. The boy could be seen threatening a woman who asked them to clean their litter by saying that he would "knock your brains out." New Zealand's assistant general manager of immigration, Peter Devoy, said the family had been issued with a deportation notice on the grounds of "matters relating to the character." Indian Gutka Company, Kamla Pasand's 1300 Employees Turn Royal Caribbean's Family Cruise Into a Nightmare (Watch Video)

Here are videos of their indecent behaviour:

A 26-year-old member of the family on Wednesday pleaded guilty to stealing NZ$55 ($37) worth of goods from a petrol station. Reportedly, a family member hit a journalist with a shoe when approached for a comment. Following the incidents, a family member told the New Zealand Herald that they have decided to cut short their holiday and return home this week.

John Johnson one of the family members insisted his family were of good behaviour and claimed his grandfather was the "10th richest man in England." He also said that he was made to feel "very unwelcome" in New Zealand. He told The Sun that it all kicked off after his nephew was slapped by another boy at a beach in Auckland. He also said that they were abused and called "Irish scum". John said after being intimidated they fled leaving their trash behind.

(The above story first appeared on LatestLY on Jan 16, 2019 07:49 PM IST. For more news and updates on politics, world, sports, entertainment and lifestyle, log on to our website latestly.com).