WIMI Hologram Starts Its Exploration in the Field of Metaverse, Sorting Out the Five Levels of Metaverse 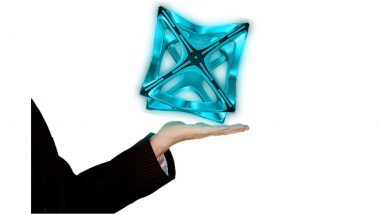 The term "Metaverse" has always been seen this year, which is courted by start-ups, tech giants and venture capital. Facebook's high-profile entry has pushed the popularity of the Metaverse to a new high stage, with many media even calling 2021 as the "first year of the "Metaverse".

On August 29, ByteDance planned to invest RMB 9 billion to acquire Pico VR, much higher than RMB 5 billion previously estimated by the media.

In addition to ByteDance, other big companies are also on the Metaverse track. Tencent is a strategic partner of Roblox and has a 40% stock in Epic Games. ByteDance invested Beijing Code Qiankun Technology Co., Ltd nearly RMB 100 million this year. Facebook announced that it would transform itself from an Internet company into a Metaverse company in five years.

It's not surprising on Wall Street that the underlying logic of stories more important than products makes the Metaverse grow crazy. No matter it is foreign Metaverse or Tencent All True Internet, although the names are different, they all describe a possible future—the deep interaction and integration of real life and online life. Tencent has a 48% share in Epic Games for unreal engine and a 12% stake in Snap for AR. For Tencent, perhaps it is not pursuing the Metaverse or the real Internet, but the commonality of its business form points to this new concept more acceptable to the public. So Tencent is also willing to help with the Metaverse, even if only by default. Whether or not its businesses end up in the Metaverse, Tencent can benefit from a concerted push across industries. Unlike Tencent pushing the Metaverse, The ByteDance is more like being tied up to the "Metaverse". The investment of Code Qiankun Technology Co., Ltd is thought to lay out "virtual worlds" and its acquisition of Pico is a bridge between the real and the virtual in the Metaverse.

The Metaverse and brain-machine interconnections are still technologically immature, but there is no end to the exploration of these concepts. Between virtual and reality, science and technology are also developing effectively in some fields. Human exploration is to bring virtual things true again and again.

Metaverse is a collection of virtual time and space, consisting of a series of AR, VR and the Internet. Generally speaking, the "Metaverse" is a virtual world parallel to and highly interconnected. With the development of AR/VR, cloud computing, AI, 5G and the launch of the first ROBLOX, Metaverse is moving from concept to reality.

The Metaverse is forward-looking and still in the early stage of development, which is promising for the future.

Here are the five levels of US stock investment targets:

Entry: Facebook is expected to first benefit from the Metaverse, whose Oculus Quest 2 products are already the highest-selling VR devices.

2B Design Technology Company: Tesla, Microsoft, Google, Baidu, Nvidia and other companies dig deep in AI technology, which will also benefit from the Metaverse's demand for AI capabilities. Tesla disclosed publicly a homemade AI training chip Dojo D1 for the first time, which has the powerful computing power of GPU, more CPU elasticity and ultra-speed transmission bandwidth. It even outperforms Google's TPU V3 in AI computing power and provides 362 TFLOPS. Tesla will not only use it to accelerate AI training to create fully autonomous cars, but also use it as AI training for the Tesla Bot, the first humanoid robot.

Cloud and infrastructure: Alibaba, Tencent and other cloud computing companies will be the first to benefit. Ali Cloud IDST is committed to creating core AI technologies covering image and video, voice interaction, natural language understanding and decision making. It is dedicated to providing computing and data processing capabilities as an online public service and providing services to enterprises, developers and government agencies in the areas of the Internet of Things, new finance, energy, big games, big manufacturing and so on

GaaS: On the game design tool end, Tencent, Netease and other big companies have their own-developed game engine (Quicksilver, Tencent NeoX, Netease), the technology is relatively mature, these companies will also prepare for the entry into the Metaverse. In addition, Roblox, as a representative of the Metaverse, makes virtual image and IP feel like virtual and real interactions and will also promote VR and possibly AR technology.  Roblox fits all the properties of the Metaverse, so it's easier to build this thing.

In short, the Metaverse not only gives people imagination in concept, but also becomes hot in the investment market with the Internet giants' layout and promotion.