Amid Riot, Someone Sets Up Stall Outside US Capitol, Sells Chicken and Fries; Picture Goes Viral

Amid chaos outside and inside the US Capitol, someone set up a stall and started selling chicken and fries. A picture of the same is going viral on social media. 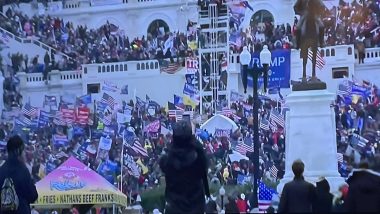 Chicken and Fries Being Sold Amid Riot Outside US Capitol (Photo Credits: Twitter)

Washington, January 7: Supporters of US President Donald Trump violently stormed the Capitol building, which houses the Congress, on Wednesday when the lawmakers had gathered to certify the electoral college votes. Amid chaos outside and inside the US Capitol, someone set up a stall and started selling chicken and fries. A picture of the stall selling chicken and fries with pro-Trump-occupied US Capitol in the background is going viral on social media. US Capitol Violence: Ivanka Trump Calls Rioters 'American Patriots', Deletes Tweet After Backlash.

In the viral photo, US Capitol building is seen completely overtaken by pro-Trump demonstrators. Exact opposite the structure, someone is seen selling chicken and fries from a tiny stall. It remained unclear who was behind the stall and continued his business despite a chaotic situation in and around the US Capitol. US Capitol Riot: 'Nothing Will Stop Us,' Tweeted Pro-Trump Woman Before She Was Shot Dead in Violence Inside Congress.

Chicken and Fries Being Sold Amid Riot Around US Capitol:

Someone started selling chicken and fries during protest at US Capitol pic.twitter.com/UiZews9fmY

Pro-Trump groups broke into the Capitol building and went on a rampage, forcing lawmakers to halt the proceedings to certify the election of Joe Biden as President and Kamala Harris as Vice President. Gunshots were fired and security was breached the violent protesters. They reached the Capitol from a rally where Trump had vowed he would “never concede” his defeat to Biden.

(The above story first appeared on LatestLY on Jan 07, 2021 02:47 PM IST. For more news and updates on politics, world, sports, entertainment and lifestyle, log on to our website latestly.com).

Comments
Tags:
chicken Donald Trump fries US Capitol US Capitol Riot US Capitol Violence
Comments
You might also like