Ayurvedic Chicken And Eggs Should Be Declared Vegetarian, Says Sanjay Raut of Shiv Sena; Netizens Have Hilarious Reactions And Suggestions

While discussing Ayurveda in the House, Shiv Sena leader and Rajya Sabha MP Sanjay Raut demanded that chicken and eggs be classified as vegetarian. The internet is filled with hilarious memes following Raut's bizarre demand. 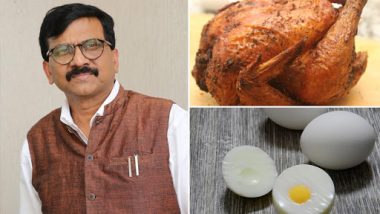 Mumbai, July 17:  While discussing Ayurveda in the House, Shiv Sena leader and Rajya Sabha MP Sanjay Raut on Tuesday demanded that chicken and eggs be classified as vegetarian. The internet is filled with hilarious memes following Raut's bizarre demand. They want beef and mutton to be added in the list of Raut's vegetarian items. Sanjay Raut on Mumbai Wall Collapse: 'It's Not BMC's Fault, Blame the Monsoon'

He took everyone by surprise when he said that the Ayush Ministry should decide if the chicken is non-vegetarian or vegetarian. The Parliamentarian demanded at least Rs 10,000 crore for AYUSH.

Check some of the hilarious tweets following Raut's demand of chicken to be classified as vegetarian:

Not in a mood to give up Chicken any time soon:

Now no need to give up meat because chicken will be declared as vegetarian. That’s what a RS MP rom Maharashtra wants.

Plan in place for Navratri:

On Tuesday, the minister cited an example of how the Adivasis as Nandurbar region fed him Ayurvedic chicken, which promises to cure illness.  Talking about ayurvedic eggs, he informed that the researchers from Choudhary Charan Singh University are studying on it.

Earlier this month, Raut was in the news after the Malad wall collapse during torrential Mumbai rains, where he made a statement that BMC was not to be blamed for the wall collapse because the entire fault lies in the monsoon.

(The above story first appeared on LatestLY on Jul 17, 2019 01:19 PM IST. For more news and updates on politics, world, sports, entertainment and lifestyle, log on to our website latestly.com).