Bathing Cobra to Rat Chasing Away a Serpent, Interesting Snake Videos That Went Viral This Week 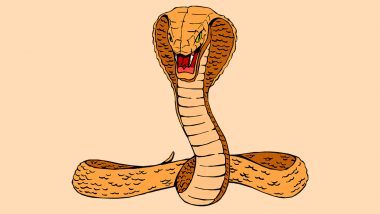 Do you love watching through some snake videos? Not everyone loves snakes or these slithering reptiles but once in a while, it is good to watch through some videos. The internet has a plethora of collection if you just type snake videos. From attacks, prey and predator fights to rescue of the most dangerous snakes, there are so many times of videos online. In this article, we will take a round-up of a few ones that went viral in the last few days. These are short clips which have been shared on Twitter and Facebook. 'Rare' Two-Headed Wolf Snake Spotted in Odisha But It's Not The Only One! View Pics and Videos of Serpents With Two Heads From Around The World.

One story about snakes that definitely grabbed all headlines was a man in Kerala using a snake in a murder plot. As fictional as it may sound, but the case did happen in Kolam.  A husband bought a cobra snake to kill his 25-year-old wife with a snakebite. He wanted to get rid of his wife after he had attained a huge dowry. He wanted to marry another woman. Although, there is no video, the snake story is scary enough.

A video of a snake taking an "apparent" bath also went viral this week. A man was pouring water on a cobra, probably after it was rescued. The video was shared online and people raised concern if this was appropriate behaviour. But it was most likely, to cool off the snake from the rising temperatures.

Head bath for the King!

The King Cobra has enough venom to kill an elephant or 20 men; so don’t ever try this yourself

From the absolutely amazing @susantananda3

Grandma Hurling a Snake Away

A rather shocking yet seeming funny footage of a grandma dealing with a cobra snake was shared online. An elderly woman dragged along a snake and then hurled it away in an open area, away from the residential region. The location from where it was shot wasn't confirmed but netizens were sure impressed by this grandma's courage.

Grandma that’s not the way to treat a COBRA😳 pic.twitter.com/RkQg8gdBQk

Fight Between Rat and Snake

Prey and predators fight can be very interesting to watch especially if it involves a snake. A video of a rat and snake fight was also shared online by IFS officer Susanta Nanda. In this video, the rat manages to chase away the predator as she protects her little baby. It shows how mothers can do anything when it comes to protect their little one.

This snake was never seen again.

Shamed to fame by a rat chasing it down😳

But when you see it’s the mother who did it, one realises that mother’s can do anything for their kid. Motherhood can be the biggest weapon on earth🙏 pic.twitter.com/gTF1KOXR7c

Another story that has come in today, is of a peacock falling prey to a python in Haryana's Yamunanagar district. There are no pictures or videos of this but the villagers saw the snake dragging the bird away. By the time the officials arrived for a rescue, the serpent had swallowed it.

Every few days, we do have such stories and videos of snakes that come in from India or around the world. If you have seen a snake video that we might have missed out on, then do let us know or share it with us on your social profiles.

(The above story first appeared on LatestLY on May 31, 2020 06:00 PM IST. For more news and updates on politics, world, sports, entertainment and lifestyle, log on to our website latestly.com).