A Twitter user has recently shared some chilling details from a boys chat group where they casually talk about "gang-raping girls". The screenshot attached by the Twitter user shows a boy convincing the others to gang rape a girl. The group of boys as revealed by the girl is from South Delhi are has boys aged around 17-18. 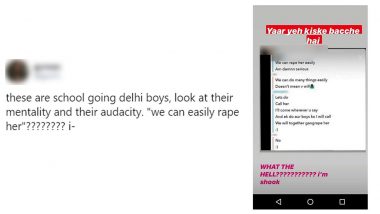 Some Delhi Twitter users have recently shared chilling details from a boys chat group (Bois Locker Room) where they casually talk about "gang-raping girls". The screenshot attached by the Twitter user shows a boy convincing the others to gang rape a girl. The group of boys as revealed by the girl is from South Delhi and consists of boys around the age 17-18.  Some of them are as young as 14 years old, as per claims. She shared Snapchat screengrabs from her conversation with a participant from the Instagram group called "boy's locker room" or "Bois Locker Room" (there are reportedly several such groups and users on Instagram and Snapchat with alt IDs)  where they objectify girls. She also accused them of "morphing pictures of girls their age." She revealed that 2 of the boys from the group are from her school. In the tweet, she also said that she and her friends are "freaking out" because of it.

The tweet has received a lot of responses, some of the people who have commented have also identified a few boys as their classmates. Police intervention is currently being sought in the situation. In the tweet the girl has written, "A group of south delhi guys aged 17-18 types have this ig gc named "boy's locker room" where they shit on, objectify and morph pictures of girls their age. 2 boys from my school are a part of it. MY FRIENDS AND I ARE FREAKING OUT THIS IS SO EWWW AND NOW MY MOM WANTS ME TO QUIT IG" 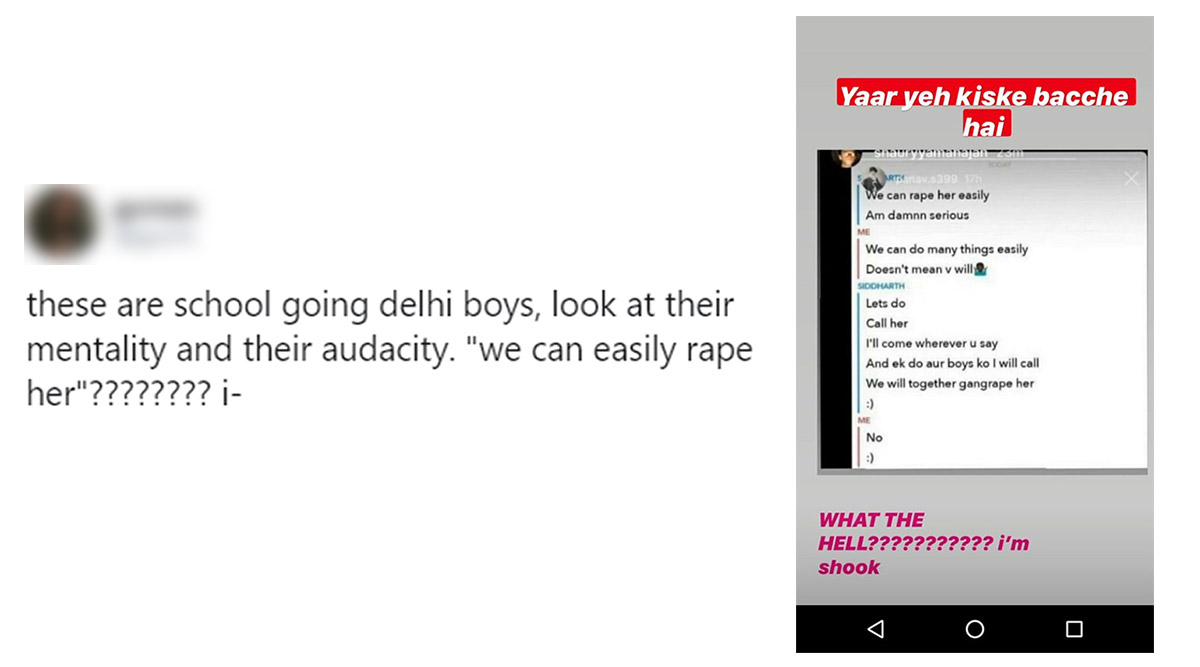 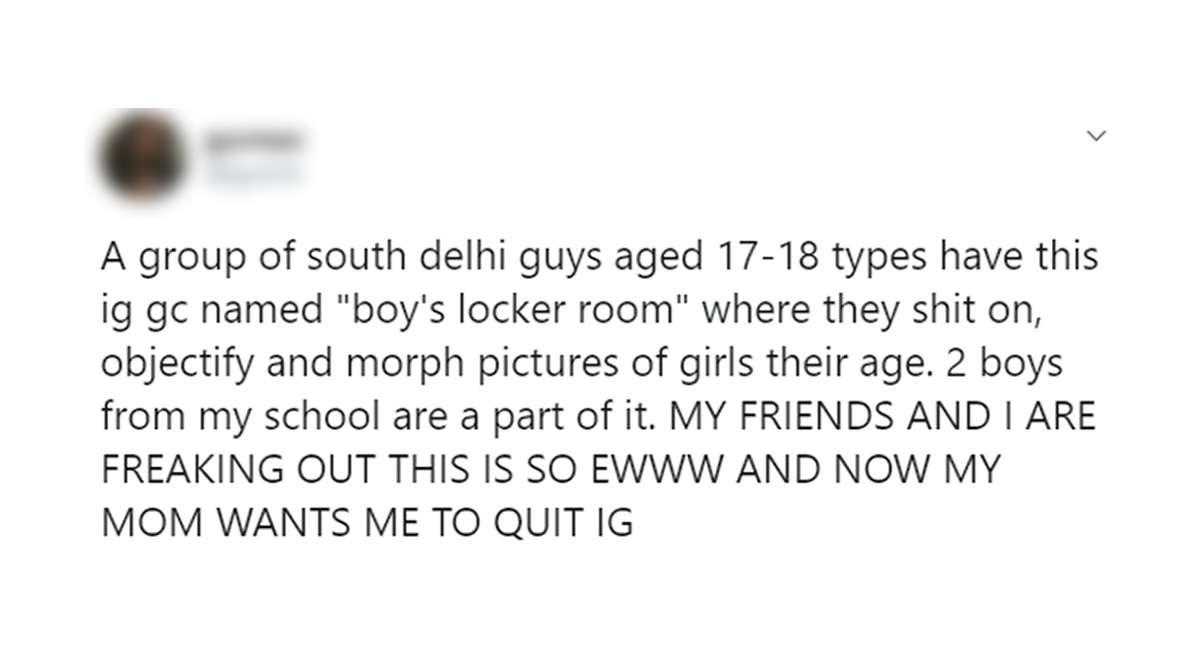 In the tweet, she also posted a screenshot of the list of people in the IG group out of which many Twitter users have identified their classmates and friends. "h*ly f*ck one of them is school junior of mine???? i literally went to summer camp with him?????", one tweet read. Another tweet read, "4 of them are my classmates, I have never been this disgusted in my life before" 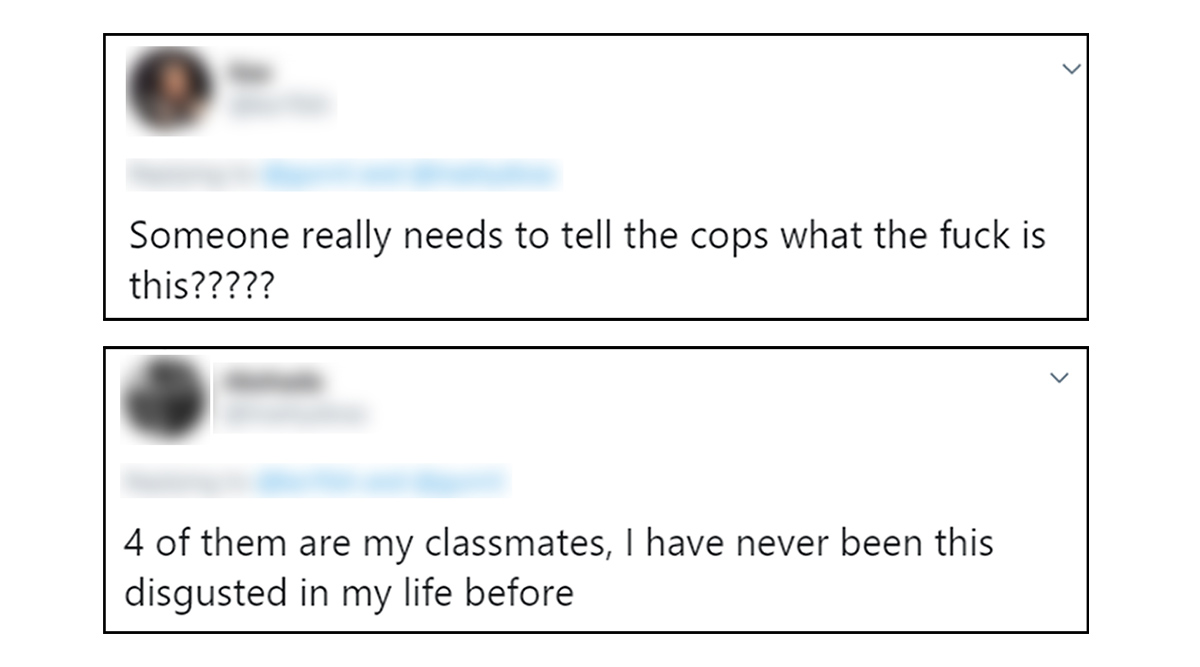 Netizens are looking for the police to intervene and others are identifying the boys (Photo credits: Twitter) 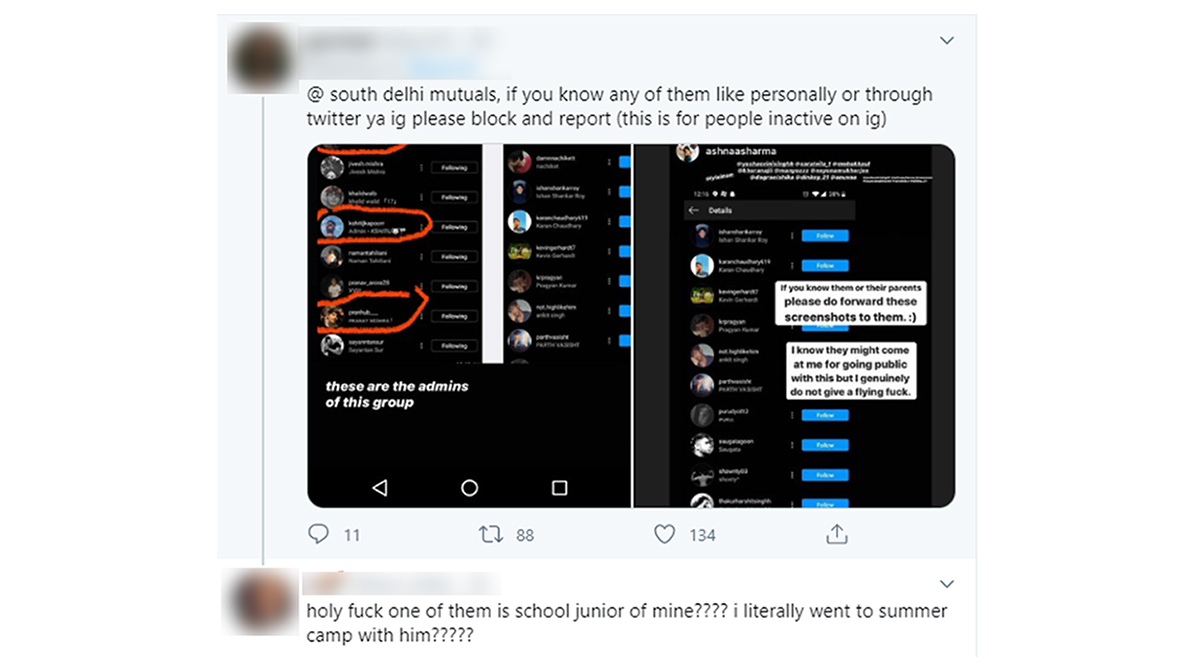 She later tweeted out to ask any South Delhi mutuals, to block the people they know any of the boys. Her tweet read, "south delhi mutuals, if you know any of them like personally or through twitter ya ig please block and report (this is for people inactive on it)".

Netizens are urging Delhi Police to take some action against this as it may take a grim turn any moment. The tweets have garnered enough attention on the social media platform and after other Twitter users identifying some of the group members, Twitterverse wants the police to look into the matter.

(The above story first appeared on LatestLY on May 04, 2020 01:16 PM IST. For more news and updates on politics, world, sports, entertainment and lifestyle, log on to our website latestly.com).