He captured the snow leopards, known as the 'ghost of the mountains' that live above the tree line on steep and rocky peaks, in his mobile camera close to the Langcha-Kaza road, just three km away from Kaza, in the Spiti Valley in Himachal Pradesh. 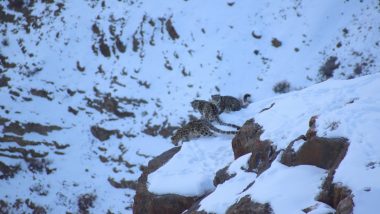 Shimla, January 20: How often do you see a critically endangered, elusive snow leopard, a flagship species for the high-altitude Himalayas, in nature? Rarely or never for some, believe wildlife experts.

But Assistant Public Relations Officer Ajay Banyal spotted a roaming mother snow leopard with two cubs through the snow just close to Kaza, the headquarters of Spiti that is some 350 km from the state capital Shimla, on Wednesday evening.

He captured the snow leopards, known as the 'ghost of the mountains' that live above the tree line on steep and rocky peaks, in his mobile camera close to the Langcha-Kaza road, just three km away from Kaza, in the Spiti Valley in Himachal Pradesh. Leopard Captured at Sila, Katamur Near National Institute of Pharmaceutical.

"It was a lucky encounter with the elusive snow leopard," Banyal told IANS over phone from Kaza where he is posted. "In the past two and a half years of my posting in Kaza, I was trying to spot the snow leopard across the Spiti Valley, a home to the snow leopard, during my assignments. It was a chance encounter last evening when I spotted a snow leopard family while I was travelling in a vehicle," an excited and energetic Banyal said.

He also captured a video clip to raise public awareness and support for snow leopard conservation. Recent studies by the state forest Department using camera traps have suggested a healthy increase in the population of snow leopards, especially in the Spiti Valley that supports its sufficient prey blue sheep.

Elated over the snow leopards' sighting, 1988-batch IFS officer Ajay Srivastava, Principal Chief Conservator of Forests (PCCF), told IANS on Thursday the Spiti landscape has been rated one of the country's best.

India has identified three large landscapes -- Hemis-Spiti across Ladakh and Himachal Pradesh; Nanda Devi-Gangotri in Uttarakhand; and Khangchendzonga -- Tawang across Sikkim and Arunachal Pradesh where the Central government is committing to landscape restoration for snow leopard conservation. India has been party to the Global Snow Leopard and Ecosystem Protection (GSLEP) Programme since 2013.

Srivastava, who was earlier posted as PCCF (wildlife)-cum-chief wildlife warden, said as per studies conducted by the wildlife wing in collaboration with the Nature Conservation Foundation the Spiti landscape is home to some 70 snow leopards, a healthy population.

Studies also report a bulk of snow leopard's occurrence is reported outside protected areas, indicating a deep-rooted man-animal bondage. The snow leopard, a graceful golden-eyed animal with thick fur, padded paws and a long tail, is found in rocky regions at an altitude from 2,700 to 6,000 metres (8,900 ft to 20,000 ft). Rare Bhutanese ‘Takin’ Spotted in Arunachal Pradesh Forests (See Pics).

As a flagship species, Himachal Pradesh has adopted it as its state animal. The estimation was carried out by laying camera traps, say wildlife officials. The estimation reveals that the density of snow leopard ranges from 0.08 to 0.37 individuals per 100 sq km in the trans-Himalayan regions of Spiti, Pin Valley and upper Kinnaur with recording the highest densities, both of the predator and its prey, mainly the blue sheep (bharal) and the mountain ibex.

The snow leopard landscape is dominated by Buddhists, who mostly grow peas and potatoes and have adapted themselves to co-exist with the wild animals as the species are deeply embedded in their folklore.

However, wildlife experts have been expressing concern over the rising population of the abandoned dogs in high mountains that might pose a threat to the snow leopards and their food chain.

A first-of-its-kind latest study by the state wildlife wing through the Zoological Survey of India (ZSI) says the rise in population of feral dogs in habitat of the snow leopard is a matter of concern.

(The above story first appeared on LatestLY on Jan 20, 2022 11:02 PM IST. For more news and updates on politics, world, sports, entertainment and lifestyle, log on to our website latestly.com).