"Blue & Grey,” “Telepathy,” “Life Goes On,” “Dynamite,” and more, BTS, just performed at the most-awaited MTV Unplugged. Can ARMYs keep calm? Of course not! They are so happy that they are crying (shedding happy tears, of course). 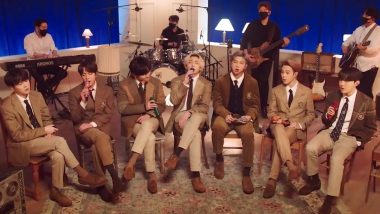 The Bangtan Boys, aka BTS, just performed at the most-awaited MTV Unplugged. Can ARMYs keep calm? Of course not! After all, the K-Pop singers once again hooked their fans with their soulful and energetic performances; even it was in a small and cosy room. Distanced from fans, (only virtually) each member of BTS shared some anecdotes, beautiful words and expressed how they miss entertaining their fans in person. “Blue & Grey,” “Telepathy,” “Life Goes On,” “Dynamite,” and more, ARMY is falling in love with BTS, all over again. Besides, there was a surprise too—a special cover of Coldplay’s Fix You. Fans are in bliss, and they are so happy that they are “crying,” (happy tears, of course).

Ahead of the unplugged, MTV hosted a 24-hour free livestreaming titled, “Best of BTS,” on YouTube. A series of some of the most memorable performances of the boy band was shown and some interviews too. At MTV Unplugged, BTS served a treat for their fans. RM, Jin, Suga, J-Hope, Jimin, V and Jungkook performed two tracks from the hit album “BE,” “Telepathy,” “Blue & Grey,” “Dynamite,” while covering Coldplay’s “Fix You.” Well, this came in as a total surprise.

The episode began with the boys performing, “Telepathy.” BTS dressed in colourful outfits to match the theme of the song, sang hit track in a room arranged with cosy elements. Jimin expressed his happiness over the members performing together, after so long, while referring to Suga’s absence from live performances because of his shoulder surgery. Now he is back, and fans are too thrilled!

BTS went on performing the heartbreaking “Blue & Grey,” which V said, was very close to his heart. Not only ARMY, even we shed a few tears! The band recreated an open field in a room full of sunshine, featuring blue flowers, while they were dressed in different shades of grey.

The surprise element was Coldplay’s “Fix You.” The band members said that during the pandemic, this song comforted them; hence they thought to perform the song for the ARMY.

Social media is filled with reactions to BTS at MTV Unplugged. “I am crying,” is one of the top trends on Twitter, with ARMYs expressing how emotional they got seeing their favourite boy band perform. Before the end of the show, each member shared their concluding thoughts.

I just woke up for #BTSUnplugged and I'M CRYING BC OF BLUE AND GREY PERFORMANCE ;-; pic.twitter.com/Gvl1wvgiRh

taehyung singing the part “and i will try to fix you” with his deep soulful voice 😭#BTSUnplugged #BTSonMTVpic.twitter.com/ARtLYySDcD

The pandemic has led artists across the world to find different ways to bring their music to audiences. With their debut appearance on the long-running, “MTV Unplugged,” series, BTS amazingly transformed their stadium-filling show into something more intimate.

(The above story first appeared on LatestLY on Feb 24, 2021 11:07 AM IST. For more news and updates on politics, world, sports, entertainment and lifestyle, log on to our website latestly.com).