RM shared pictures of his recent visit to an art exhibition in Seoul. Photos of his bicycle, masked selfie, and gorgeous art display are also shared on Twitter on BTS’ official handle. Fans cannot keep calm! ARMY drool over their favourite Joonie! 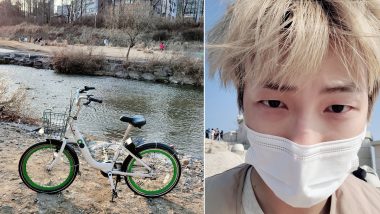 The Bangtan Boys, aka BTS, never fail to make it to the headlines or ruling the social media trending hashtags. While K-Pop ARMY is enjoying a 24-hour MTV live streaming, ‘Best of BTS,’ the official Twitter page of the Bangtan Boys just dropped another sneak-peek of the leader RM aka Kim Nam-joon’s recent visit to an art exhibition. Fans of RM surely knows how he shares a close relationship with art and history. His frequent visits and donations prove the same. The K-Pop star shared pictures of his recent visit to an art exhibition in Seoul. Photos of his bicycle, masked selfie, and gorgeous art display are also shared on Twitter on BTS’ official handle. Fans cannot keep calm! ARMY drool over their favourite Joonie!

RM is an exceptionally talented artist. However, the international rapper has expressed his interest in art from time to time. He is an avid art enthusiast. Recently, videos on the internet showed the BTS members channelizing their artistry skills in decorating photo cards with cute emojis. Joonie’s excitement in the process was visible.

This time around, RM decided to visit an art display at the National Museum of Korea. The singer even shared two pictures from the exhibition before sharing a photo of his bicycle and a selfie. A BTS fan on Twitter, revealed that the art display is a winter scene, done by Kim Jeong-hui, and it is a part of the “After Every Winter Comes Spring.” Well, he is correct; after all, the photos are captioned with emojis representing winter and spring.

imagine having a date with joonie- 😳 pic.twitter.com/zskpmTKUpw

People Are Impressed With His Choice of Transport

Even though the pandemic has difficult for everyone, the K-Pop boy band made sure they keep their fans entertained throughout. It paid off well too! The year 2020 easily belonged to BTS, with the seven-member band topping US charts for weeks. They even released their first English track, “Dynamite” which won a Grammy nomination. Besides, ARMYs constant support and love helped them be on the top!

(The above story first appeared on LatestLY on Feb 23, 2021 06:57 PM IST. For more news and updates on politics, world, sports, entertainment and lifestyle, log on to our website latestly.com).