California Monolith Disappears! Group of Men Took Down the Metallic Structure at Pine Mountain in Atascadero & Replaced It With Wooden Cross (View Pics)

The California monolith now disappeared. According to the City of Atascadero Facebook page, a group of men took down the 3-sided steel structure and replaced it with a wooden cross. The pictures show the empty ground, with a wood at the same spot, where the monolith stood. 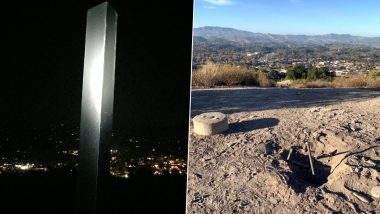 What is happening around the world? Trust us; you are the only one scratching your head over it! We are all equally puzzled. First monoliths started appearing mysteriously and now being removed, place after place. We have all seen the viral footage of men dismantling the Utah monolith in the US. Days after that incident happened, another metallic structure appeared at Pine Mountain in Atascadero, California. It resembled the one in Utah, but many believed, it was not the same. While the world was hooked with these recent developments, thinking how it got there, what could be the possibilities and more, the monolith now disappeared. Yes, it’s gone! According to the City of Atascadero Facebook page, a group of men took down the 3-sided steel structure and replaced it with a wooden cross. The pictures show the empty ground, with a wood at the same spot, where the monolith stood.

The world is in a monolith mania, at the moment, and it continues. When the first time it reportedly appeared and disappeared from Utah, many sci-fi lovers guessed it might be the work of aliens. But it was not them but humans who recorded videos of themselves dismantling the structure and taking it away. Meanwhile, the monolith spotted in Romania vanished too. Whoever was behind this, leaving no trace that will clear the mystery. Everyone on social media, including popular brands, began reacting to the mysterious monoliths appearing across countries.

The monolith in California was discovered, which as per locals was not there until December 1, 2020. People were confused again, as to who might have removed it. Pranksters or aliens? Turns out, the structure which had a plain mirror surface was dismantled by a group of men. As per The Guardian, they were live streaming the entire event. The report further adds that the young men drove from Southern California to tear down the structure, under cover of darkness and took it down, while chanting, “Christ is king!” The video has been removed from social media platforms.

City of Atascadero Facebook page posted images that show the empty place where the monolith once stood was replaced with a wooden cross. “Many of you have had questions around the appearance and disappearance of the Monolith on top of Pine Mountain in Stadium Park. At this time, the Monolith has been taken down by a group that traveled over five hours in the middle of the night to remove the mysterious 3-sided steel structure that stood about 10 ft. tall and appeared to weigh an estimated 200 pounds. If you have any information about the Monolith's arrival and/ or departure, please contact the Atascadero Police Department,” reads the Facebook post that contains the images.

The monolith mania has created quite a buzz on the internet, with people making memes to the mysterious disappearance too. The men responsible for vandalising the California monolith were not identified as of yet, and further trace on the same is on.

(The above story first appeared on LatestLY on Dec 05, 2020 11:33 AM IST. For more news and updates on politics, world, sports, entertainment and lifestyle, log on to our website latestly.com).