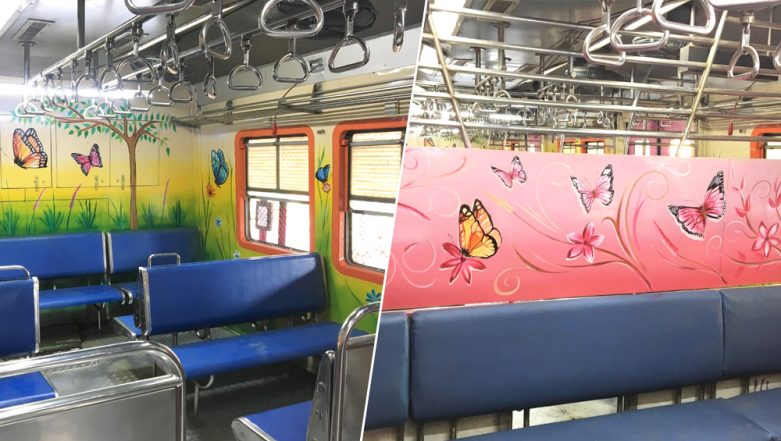 Mumbai local train compartments have upgraded itself by painting the interiors in pink. It was some four to five years ago some of the women's compartments were coloured in pink from the inside for the first time. While the paint has started fading away, the Central Railways have freshly coloured a women's compartment in one train on a pilot basis. This time it is not just pink paint but has beautiful butterflies, flowers and artistic designs also done on it. Other general compartments will also be soon painted.

Rajendra B. Aklekar, author of a book on history on India's first railway tweeted saying, "Pretty! Mumbai local train's ladies compartment on @Central_Railway gets pretty interiors. Done in one train on pilot basis. Will be done in general compartment soon." Panda at Vienna Zoo Learns Painting and Now Hundreds of Its ‘Artworks’ Are Being Sold for Rs 40,000 Each! (Watch Video)

While some social media users looked glad about the lovely pink colour, not everyone seemed glad. People commented saying that more space is what people require in Mumbai locals and not pictures of flowers and butterflies. Some also said that chewing of tobacco 'gutka' should be banned to keep trains clean because these pictures will soon be ruined by red paan stains.

Earlier when the interiors of ladies' compartment were painted pink, some women had expressed displeasure stating it was stereotypical and did not help women in any way.

Pretty! Mumbai local train's ladies compartment on @Central_Railway gets pretty interiors. Done in one train on pilot basis. Will be done in general compartment soon pic.twitter.com/lv3KH6N7ZD

Meanwhile, a Mumbai Mirror report says that Railway Board has opted similar colour combination for local trains. While the colours have changed from yellow and red to purple and white, Mumbai's local trains will all from now onwards look dark pink and white. The report quotes a Central Railway official as saying, "The Railway Board has decided that the colour scheme of EMU (electric multiple unit) trains shall be as per Mumbai Urban Transport Project – II (MUTP- II) scheme ie dark pink and white."