The Canadian songwriter is very popular among the meme creators. Whether he is filming a music video, snapped by the paparazzi or simply dancing, everything he does has become meme-able. 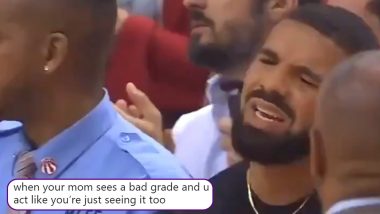 There were already plenty of funny Drake memes on the internet. But after the recent historic Toronto Raptors first win of the NBA title, the Canadian rapper is once again dominating the meme world, with his apparent expression. Drake has been a constant courtside presence during the National Basketball Association (NBA) finals over the past few weeks, cheering his favourite Toronto Raptors. He was right there, when Golden State Warriors player, Kevin Durant suffered a gruesome injury during the game. Drake’s questionable disappointed expression was caught on camera and later went viral as Durant was escorted off of the court. Toronto Raptors Beats Golden State Warriors 114-110 to Win Their First NBA Title.

The Toronto Raptors sealed their first-ever US NBA championship, in Game 6 of the finals opposite Golden State Warriors. Durant and Klay Thompson’s serious injuries, notably stood as a benefit that cost the championship. Drake later took to Instagram, as a tribute Durant and praying for his quick recovery.

Was tough for any of us to even enjoy that game tonight after seeing this transpire. Praying for our brother. That’s my only concern tonight is your well being. “The game needs me” is an understatement when it comes to 35. Please wish the best for this true warrior. 🙏🏽

However, it did not work out. People online began to question if his initial reaction may have involved a few crocodile tears. In no time, Drake’s reaction to Durant’s injury became a meme and the reactions are hilarious. The memes are for when you need to pretend to be shocked or disappointed when that very clearly is not the case.

Drake got emotional as he watched Kevin Durant leave the court with an Achilles injury. #NBAFinals pic.twitter.com/6DvWkvYy6p

When your niece is explaining something tragic that happened to one of her dolls pic.twitter.com/MCbTCw931l

Almost All Working People on a Monday

Me coming to work late, acting like im mad at the trains when I actually sat at the edge of my bed until all my time was up pic.twitter.com/sExGgu2Moo

When your mom hands you the phone to talk to a relative. pic.twitter.com/DTdViDlMR2

The Canadian songwriter is very popular among the meme creators. Whether he is filming a music video, snapped by the paparazzi or simply dancing, everything he does has become meme-able. Meanwhile, to celebrate his favourite Toronto Raptors first NBA title, Drake is reportedly set to release to new songs, very soon.

(The above story first appeared on LatestLY on Jun 15, 2019 01:50 PM IST. For more news and updates on politics, world, sports, entertainment and lifestyle, log on to our website latestly.com).