Exit the Dragon? Amul Releases 'Made in India' Topical Ad Over The Boycott of Chinese Products Amid India-China Border Tension (View Pic) 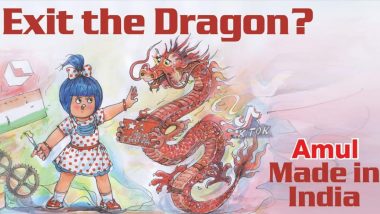 There is a border tension between India and China. According to reports, Chinese troops engaged in physical brawls with Indian soldiers near eastern Ladakh. While the coronavirus outbreak has significantly affected the country, this border tension has now created more chaos. A few citizens in India are urging the government to ban products ‘Made in China’ including the video-sharing app, TikTok. Amul India as well shared the brand’s stand over the rising border tension. Its new 'Made in India' ad features the Amul girl in the topical, saving her country from the dragon, which is also a symbol of power and good luck in China. The topical ad was released over the boycott of Chinese products amid the border tension. The picture received hundreds of reactions and retweets, significantly in support of the brand’s stand about boycotting Chinese products in India. Top Military-Level Talks On June 6 To Resolve Troop Confrontation in Ladakh.

The border tension between India and China have been escalating and is making headlines since the past few days. It was reported that the Chinese military was hindering normal patrolling by its troops along the Line of Actual Control or LAC in Ladakh and Sikkim. The report raged citizens who soon started trending #BoycottChineseProducts on social media. Sonam Wangchuk, the man who inspired Aamir Khan’s character, Rancho in Bollywood hit 3 Idiots also shared his thoughts on the border tension, urging citizens to follow him and stop using products made in China. Again, some people in India also rallied online to boycott the Chinese TikTok app.

Amul’s latest ad shows its stand amid the rising tension. The topical depicts the Amul girl saving its country and its economy on her own, appearing to stop the dragon, which is a symbol of China.

Meanwhile, the increasing tension has led India and China to reportedly hold military-level talks in Ladakh on June 6. The talks have reportedly been requested by India and will be held in the Indian Border Point Meeting hut in Chushul-Moldo.

(The above story first appeared on LatestLY on Jun 03, 2020 02:57 PM IST. For more news and updates on politics, world, sports, entertainment and lifestyle, log on to our website latestly.com).