A fake viral message is spreading misinformation among the masses. The fake WhatsApp message contains an audio clip in which a man could be heard saying that he has got information on a personal level from the World Health Organisation (WHO). The audio clip has been attributed to Dr Naresh Trehan, Medanta Hospital MD. 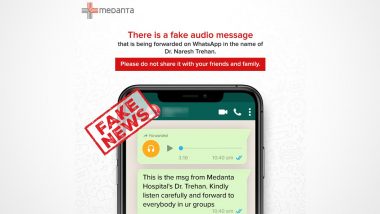 New Delhi, March 27: At the time when the world is grappling to deal with COVID-19, some mischievous elements are spreading fake news on various platforms of social media. One such fake viral message is spreading misinformation among the masses. The fake WhatsApp message contains an audio clip in which a man could be heard saying that he has got information on a personal level from the World Health Organisation (WHO), and the coronavirus situation will become worse after March 27. The audio clip has been attributed to Dr Naresh Trehan, Medanta Hospital MD. Indian Railways Cancels All Trains Till March 31? PIB Fact Check Debunks Fake Viral Message.

In the audio clip, the man could also be heard narrating the ways to cure coronavirus by doing hot water gargles twice a day among others. However, Medanta hospital termed the message as fake. It asked the netizens not to believe in the information shared in the message. In a Facebook post, the hospital said, "There is a message circulating on WhatsApp in Dr Naresh Trehan's name. If the message has not come from the official channels of Medanta Hospital, please do not forward it. Be aware of such false and dangerous news!" Coronavirus with pH Value of 5.5–8.5 Can be Cured by Eating ‘Alkaline’ Fruits? Know Truth Behind Fake Facebook Post And Correct pH Scales of Fruits.

Notably, the same audio clip was also shared in March last year with similar claims. The man in the audio clip could be heard saying that the number of COVID-19 cases were going to increase drastically and urged people to stay in their houses.

That time also, the hospital released an official statement terming the message as fake. It had also clarified that the voice in the audio clip was not that of Dr Trehan's. The Medanta hospital had tweeted, "It has come to our knowledge that a WhatsApp audio message is being circulated, which is falsely attributed to Dr Trehan. This audio message is fake. It is not the voice of Dr Trehan, nor has he ever said what is said in this audio recording." It also asked the people not to panic.

The audio recording is wrongly accompanied by a statement saying,

Please note that the official channel for any communication is only through Medanta's Twitter handle.

LatestLY advises people not to believe in such fake messages and should not spread the misinformation. People should visit official websites and believe in the official statements released by the Union Health Ministry and the WHO.

(The above story first appeared on LatestLY on Mar 27, 2021 03:38 PM IST. For more news and updates on politics, world, sports, entertainment and lifestyle, log on to our website latestly.com).