Video of Man 'Stealing' Hand Sanitiser and Keeping It Back after Getting Caught on Camera Goes Viral, Here's The Truth Behind This Incident 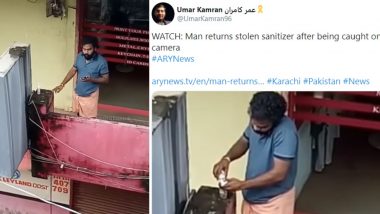 You would have come across a video of a man stealing sanitiser, but later keeping it back on realising he is being recorded on CCTV camera. The video shows him putting on the facemask and leaving immediately after. While Twitterati has termed the man as a 'sanitiser thief', but that's not the truth. The man in the video is Ranjith Pulasseri and the clip that is going viral is from a short film. The video is a part of the film the man is a part of, about the current COVID-19 pandemic and awareness on healthy habits. However, as the short clip from it began doing rounds on social media, people thought the man was actually trying to steal sanitiser. As the news went viral, he took to social media platforms explaining the fact. Fact Check: Image of Human Trial Volunteer For Russia's COVID-19 Vaccine Shared As Pic of President Vladimir Putin's Daughter.

Talking about people calling him a sanitiser thief, Ranjith told Malayalam News18 that the live short film was made by a group based in Edappal in Malappuram district. The film was shot on a mobile camera which was handled by Shashi Edappal. In the film, they imagine Corona as CCTV, hence Ranjith looks at the camera with fright and puts on the mask. The short film is the first of their short film Jagratha. Ranjith, however, said that many people misused the video. He said that Kondotty Abu, a Facebook page shared the video putting him in a bad light. Coronavirus Found in Broiler Chicken? PIB Fact Check Debunks Fake News

Here's the Video That Ranjith 'Sanitiser Thief' Shared on Facebook:

The clip was also shared on social media by many celebrities spreading awareness on precautions to be taken during COVID-19. The film has been directed by Shashi Edappal and is in the final stage.

The man in the video stole sanitiser but kept in back on realising that he was being recorded on CCTV. He then put on his facemask and left the place.

The video went viral after many people shared it calling the man in the video a 'sanitiser thief'. However, that's not the truth, it was a scripted act for a short film. The man who is being termed as thief is Ranjith Pulasseri, an actor in the film. He shared the clip on social media explaining the reality.

(The above story first appeared on LatestLY on Aug 15, 2020 01:37 PM IST. For more news and updates on politics, world, sports, entertainment and lifestyle, log on to our website latestly.com).