From 'Real' Dinosaur Clone in China to Snake Pulled Out of Woman's Throat, Bizarre Animal Videos That Were Very '2020' to Deal With!

As humans stayed in for months in lockdown, curious animals did step out in the local areas to see if things were alright? It seemed like animals and birds were reclaiming the earth. But among them too, were some bizarre instances recorded, which had a very "2020" feel to it. 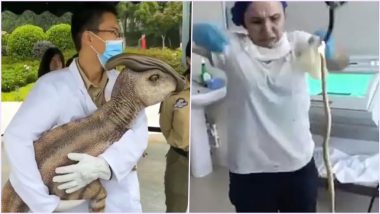 The year of 2020 has been one roller coaster ride for all humans. From dealing with the pandemic of coronavirus to surviving through the natural disasters, one after another, many people called this year a game of Jumanji. And while we humans bonded over all that's going around the world with funny memes and jokes, animal kingdom also wondered about what's happening across the world! As humans stayed in for months in lockdown, curious animals did step out in the local areas to see if things were alright? It seemed like animals and birds were reclaiming the earth.

In Australia's Queensland, where snake sightings are quiet popular, there was a definitely bizarre one. A cow was caught chewing on a sand python near the deserted Sandover Highway. Pictures of this rare sight, sure caused a buzz online.

At one point in 2020, people believed even dinosaurs were coming to life. It took a video of mechanical puppet for people to believe dinosaurs being alive again. It was a video from Jurassic museum but passed along with a fake claim of China cloning the prehistoric animals. The claim was busted soon, but with so much happening in the year, people almost believed it to be true.

Looks like we're setting up for a fun 2021. pic.twitter.com/IDFgyGP3RC

Monkeys Take Over Lopburi in Thailand:

Watch The Video of Monkeys Taking Over Thailand City:

Snake Pulled Out From Woman's Throat:

In one of the most bizarre snake encounters, the serpent crawled into a woman's body while she slept! Doctors pulled out the 4-feet slithering reptile from the woman's throat. The shocking incident took place in Levashi village, Dagestan.

In one of the instances of animals being spotted out of the blue, was wolverines returning after a 100 years! The stocky muscular carnivores were seen roaming in Mount Rainier National Park in the US. The sighting was remarkable because according to the park, the animals were not sighted for more than 100 years. Pics and videos of these rare animals went viral on social media.

Video of three wolverines at the end of a snowfield then running through a meadow into a forest. Credit: Travis Harris -kl pic.twitter.com/ALwJoAOmTG

These are some of the unusual sightings of animals that occurred this year. The dinosaur video may have been fake but it caused an equal buzz like a real one was discovered. Snakes may have been rescued from unusual places but not from a person's throat! And then there were wolverines who made their presence felt. Clearly, 2020 had much to offer.

(The above story first appeared on LatestLY on Dec 24, 2020 01:39 PM IST. For more news and updates on politics, world, sports, entertainment and lifestyle, log on to our website latestly.com).